PREVIEW: Bears ready to take the field for 2019 campaign 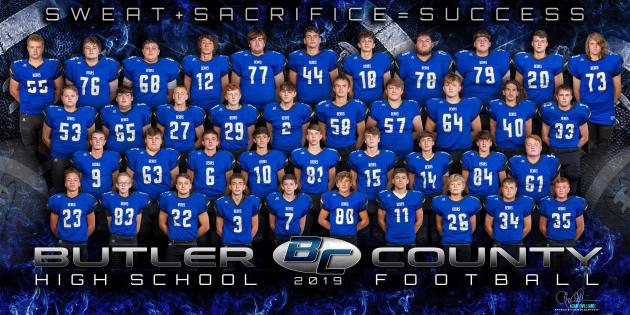 Friday night will mark the official beginning of the 2019 football season as the Butler County High School Bears travel to face the Logan County Cougars.  Logan defeated the Bears last season by a lopsided margin but Head Coach Brandon Embry is hoping to improve on that outcome.

"We are still rebuilding toward the future but these guys all gained valuable varsity experience last season.   We played everybody in varsity last year to help build toward this year and the future," said Coach Embry.

Despite the experienced gained from 2018, the coach said his squad still qualifies as a young one.

"We are still an extremely young team playing 3 freshmen and 8 sophomores significantly this year.  We do have Junior and Senior leadership this year from guys like Dylan Roberts, Josh Morris, and Senior Ethan Lawrence that have played varsity for 3 years now," said Embry.

Coach Embry believes steps taken since last season will pay off in 2019, especially in the area of strength.

"I had 35 kids in wellness last school year and the guys worked hard in the weight room to gain the needed strength for varsity football," said Embry.

"The coaching staff and players from last year also recruited the hallways to get more players out.  We are sitting at 38 on the roster with only three seniors.  That spells good things for the future of our program," said Embry.

Butler County will need to rely on several key players this season.

Offensively, Ethan Lawrence is expected to get the most carries out of the backfield this season.  According to Coach Embry, Lawrence has put in a "tremendous amount of work" in the off-season.

"He was 20 lbs. away combined from winning his class in the state weight meet this year.  He is a physical back with good speed," said Embry.

Jagger Henderson will be the starting quarter back this year.  Henderson started around 5 games for Butler County last year and the coach says he is "much improved in making his reads from a year ago."

Butler County will have an entirely new offensive line from a year ago.  Several of these guys gained some varsity reps last season.

"All of the guys listed in the skill positions are athletic and can stretch a defense.  Look for all of them to contribute offensively," said Embry.

Landon Binion and Dylan Roberts.  "They will anchor the defense at middle linebacker- both return with varsity experience," said Embry.

OLBs wil be Josh Morris and Dylan Norris.  "Both of these guys have good strength and speed to contain a defense and make good plays," stated Embry.

Butler's secondary will be made up of Zack Roberts and Brody Hunt at corners.  Trever Jones and Jagger Henderson will be at safety.

"Our defensive front will be quite versatile as I plan to roll as many as 9 guys up front.  We can go with big packages or quick packages to give different looks to offenses," said Embry.  "Trentin Embry, Carson Miller, Zack White, Dakota Powell, Jordan McCrady, Devin Poston, Colton Dunnells, Ian Moore, and Nathan Boord will all have varsity reps on the defensive line."

While district and traditional opponents remain from last season's schedule, there are new additions as Hart County and Russell County will join the mix, replacing Apollo and Muhlenberg.

"The rest of the schedule stayed the same just in a different order.   Key matchups early on will be against Edmonson, Russellville, and Hart County - three schools our size and should be really good games," said Embry.  "I believe our district is wide open this year.  Catholic has to be the favorite returning a lot of kids but the other four teams are very comparable this year:

Other coaches for 2019 are the following.

Coaches Parks, Decker, and Flener will also be coaching Freshman and JV teams this season.

The Bears will kick-off the season this Friday at 7 p.m. at Logan County.  The game will be aired live on WLBQ 101.5/103.5 FM with John Embry, Cody Donaldson and Barry Frazier.

To view the BCHS 2019 Football Schedule and Roster, click on the following link: