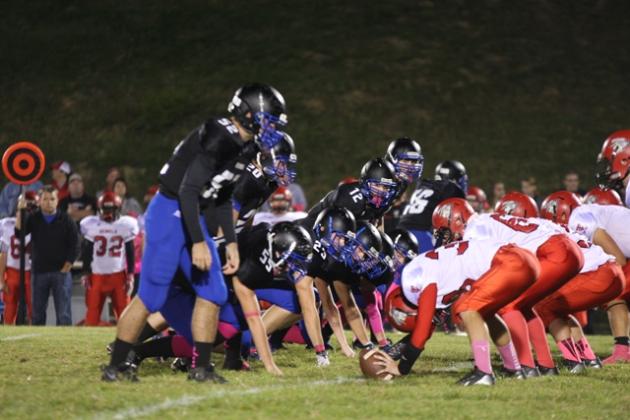 Butler County got back on the winning side of the ledger on Friday night with a 32-10 thrashing of visiting Todd County Central.  The Bears (4-3, 1-2) built on a 19-3 halftime lead en route to their first Class 2A, District 2 win of the season.

Running back Jake Martin scored from 15 yards out at 8:40 in the first quarter; Martin's P.A.T. gave the Bears a 7-0.  Todd responded by marching downfield into Butler County before the Bear defense made a stand  on a series of goal line plays.  The Rebels settled for a field goal at 1:40 to make the score 7-3.

Butler County had what was one of its best overall scoring drives of the night on its next possession.  Pass completions from quarterback Bryce Shanklin to Zeke Woodcock (16 yards), Cody White (2 receptions for 13 yards) and Jake Martin (6 yards), and an explosive 50-yard rushing gain by Shanklin put the Bears in prime scoring position.  Cody White scored at 8:13 on a 6-yard run to give Butler County a 13-3 lead.
Following a Connor Reed interception of an errant Todd pass and the slippery hands of a Rebel player attempting to catch a Butler punt, the Bears had a great scoring opportunity late in the first half - one they did not let go to waste.  Shanklin scored on a run from 12 yards out with .17 seconds left to give the Bears a 19-3 halftime lead.

Butler County had another sustained scoring drive to start the third quarter.  A 28-yard pass completion from Shanklin to Drake Embry, a 23-yard run by Jake Martin, and an 8-yard completion to Martin set up the Bears' next touchdown.  Martin scored on a 28-yard run at 2:58.  His kick gave Butler County a 26-3 lead.
Butler's final scoring drive began in the third quarter and ended in the fourth.  Carries by John Peyton, Jake Martin, and a 27-yard run by Cody White set up another Martin touchdown with 10:17 left in the game to make the score 32-3.
Todd added a touchdown late in the game (8:22) to narrow the score a bit but the Bears easily held on for the 32-10 win. Woodcock picked a pass late for the Bears to end the final Rebel possession.