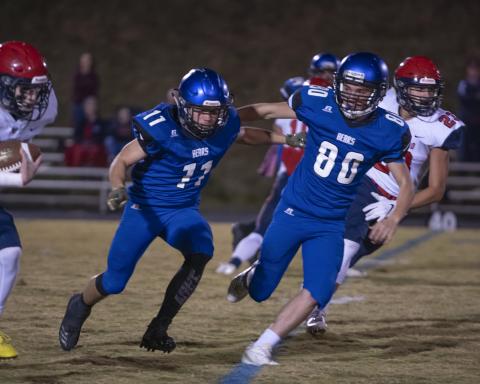 In their first meeting on record and following a 100+ mile journey, the Russell County Lakers handed the Butler County Bears a 50-14 loss on Friday night in Morgantown.

A quick first-quarter touchdown gave the Lakers the early lead before the Bears’ defense refocused and had several strong defensive stands.  Butler’s offense moved the ball throughout the first half but untimely turnovers kept the home team out of the end zone. Russell County managed a hard-fought 22-0 lead at halftime.

The Lakers effectively put the game away in the third quarter with rushing touchdowns at the beginning of the quarter and one near the end.  The Bears’ offense finally found its stride, though, with quarterback Jagger Henderson connecting with receiver Solomon Flener for a 45-yard touchdown play.  Henderson passed to Brody Hunt for the two-point conversion.

Trailing 50-8 with 1:20 left in the game, Henderson found receiver Bryar Beasley for a 63-yard touchdown.  The conversion attempt failed, making the final score 50-14.

Butler County had 258 yards of total offense on 56 plays for an average of 4.6 yards per play.  The Bears had 226 passing yards and 32 rushing yards. Quarterback Jagger Henderson was 17 for 32 with two interceptions and two touchdowns.

Time of possession was almost exactly split in half - 23:30 for Butler County and 23:10 for Russell County.

The Bears managed 12 first downs and converted 3 of 19 third down attempts and 2 of 5 fourth down opportunities.

Henderson rushed for 42 yard but negative yard plays brought the team total down.  Beasly had 119 receiving yards and Flener had 81 to lead the Bears.

“Defensively we played well most of the game against a very good Russell County squad.  Turnovers and Sppecial teams killed us Friday night,” said BCHS head coach Brandon Embry.  “Anytime you turn the ball over 5 times things most generally won't end well. We moved the ball well at times but couldn't finish drives the way we needed to.”

“Catholic has the top-rated passer in regards to passing yards in the state.  Drew Hartz gets rid of the ball very quickly, said Embry. They are a spread team that utilizes multiple receivers-- 4 guys with over 30 catches on the year.”

Kickoff is set for 7 p.m.  at Steele Stadium in Owensboro.