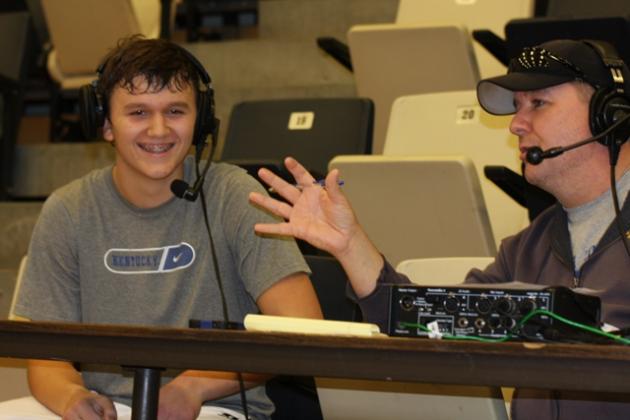 The Butler County boys' basketball team let one slip away on Friday night at Hancock County but rallied on Monday afternoon in Morgantown to defeat Allen County-Scottsville on a last-second basket by freshman Blake Graham.  The Bears fell 71-63 to Hancock at Lewisport but  were able to squeeze out a 61-59 win over the Patriots.  Butler County was without the services of Zack Burden, who was suspended by KHSAA for two games following last week's game at Ohio County.

A three-pointer by Trevor Jenkins, a turn-around basket by Zeke Woodcock, and a pair of free throws by Jenkins gave Butler County a quick 7-0 lead before Allen County-Scottsville ever got on the board.  The Patriots recovered to tie the score at 9-9 and actually took a 13-11 lead late in the quarter.

Both teams traded leads early in second quarter.  A couple of baskets by Rex Henderson - one a three -  kept the Bears close. However, a seven-point run by AC-S gave the Patriots a 27-22 lead.  Freshman guard Baylee Anderson drilled a three to narrow the gap.  AC-S added another basket and a pair of free throws to go into halftime with a 31-27 lead.

Butler County found an offensive groove in the third courtesy of baskets by Jenkins, Woodcock, Drew and Rex Henderson gave the Bears a 37-36 lead.  Butler maintained a small lead the rest of the quarter as a Caleb Deweese basket and a Rex Henderson three-pointer contributed to a 45-43 advantage for the Bears heading into the fourth quarter.

The fourth quarter saw Butler County hold onto a small lead.  Blake Graham started off the quarter a steal and basket but AC-S rallied to tie the game at 47 apiece.  Graham picked up another basket and Anderson hit a three-pointer to move the Bears ahead 52-47.  Baskets by Henderson and Jenkins gave the Bears a comfortable 9-point lead at 56-47.  The Bears still held a 59-53 margin with 2:14 left in the game.  Leading 59-56 with 1:35 remaining, Butler had a chance to ice the game from the free throw line but came up short. A steal by Graham took away one scoring opportunity for the Patriots but a missed Butler Count free throw gave the visitors another chance.  With a under 30 seconds remaining, guard Jared Walden drilled an extra-long three pointer to tie the game at 59-59.  Butler County raced to get the ball back to their end of the court before calling time out with 8 seconds left.  Both teams traded time-outs for last-minute strategy.  Coach Calvin Dockery's  designed play had Zeke Woodcock shooting the jumper from the near corner.  It was off the mark but was rebounded by Graham, who put up one shot under the basket that missed, got his own rebound and put up a second shot that found its mark as time expired, giving Butler County the 61-59 win.

Woodcock and Jenkins led the Bears in scoring with 15 each, while Rex Henderson added 12 points.  Jenkins and Anderson both had seven rebounds.

Although the Bears led for three quarters on Friday night against Hancock County, enjoying a brief 12-point advantage in the third, the Hornets buzzed back in the fourth to take the 71-63 win.

Baskets by Woodcock, Jenkins, and the Hendersons (Drew and Rex), paced Butler County's early scoring efforts.  The Bears held a 13-10 first quarter lead.  Two 3's to start the second quarter - Baylee Anderson and Trevor Jenkins - to take a 19-10 lead.  The Bears extended their lead to 22-12 after Woodcock hit a three-pointer while double-teamed.  Butler County a 35-26 lead at halftime.

Hancock tightened the game a bit late in the third but a three-pointer by Jenkins and a basket by Woodcock kept the lead at six - 48-42- going into the final quarter.

The Hornets rattled off eleven unanswered points to start the fourth quarter and take a 53-48 lead.  From that point the Bears were playing catch-up.  A floater by Rex Henderson narrowed the deficit to 58-54.  Woodcock hit a three to make the score 63-59 but the Bears weren't able to cut the Hancock lead further.  The Hornets went six free throws in a row with under a minute left in the game to seal the 71-63 victory.

Butler County (5-2) will be playing in the Campbellsville Holiday Classic after Christmas, December 26-28.