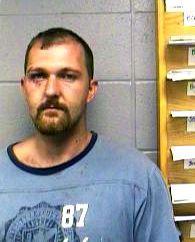 A Leonard Oak man is behind bars today following a domestic dispute and brief standoff with police on Sunday evening.  Bryan S. Proctor, 30, was arrested, taken to the hospital for treatment, and returned to the Butler County Jail.

The incident started after a call came into Butler County dispatch shortly before 7 p.m. Sunday evening from a woman indicating that her husband was threatening to kill her.  Katie Proctor, Bryan Proctor's wife, was apparently already bloodied from an alleged assault. She made the call from a neighbor's house at 4985 Leonard Oak Road.  Deputies from the Butler County Sheriff's Department and officers with the Morgantown Police Department were dispatched to the Proctor residence at 4938 Leonard Oak Road.

Dispatch advised Butler County EMS to wait until the scene could be secured by law enforcement officers.  There were reports that Proctor, the suspect, was shooting a weapon outside the trailer in the front yard.  Upon arrival, officers heard shooting - approximately 15-18 rounds from a small caliber pistol, from behind the residence.  Consequently, Leonard Oak Road was closed to traffic as officers surrounded the trailer.

With weapons drawn, Butler County Sheriff's Deputies Chris Reneer and Justin Deweese, and Morgantown Police Officer Travis McIntosh approached Proctor from around each side of the trailer and got within 15-20 feet of him.  Proctor was on the porch with a weapon in his hand.  He initially refused several commands to drop the weapon.  Eventually, Proctor did lay the .22 caliber pistol down on the banister of the deck/porch. Police then repeatedly instructed Proctor to step off the deck and away from the gun.  He refused.  Officers then approached Proctor to place him under arrest.  As he was being handcuffed, Proctor, according to police, was belligerent, became combative, and resisted arrest, resulting in a brief scuffle/restraint with officers.  It was during this time that Proctor suffered a small laceration on his head that required medical treatment.

Proctor is charged with Assault (second degree, domestic violence, felony), Wanton Endangerment (first degree, felony), and Resisting Arrest (misdemeanor).  A second weapon - a 9mm pistol - was also found.  This is the weapon officers believe may have been used in the alleged assault on Katie Proctor, who appears to have been hit in the head by a blunt object.

Katie Proctor refused transport for medical attention.  Bryan Proctor was taken to the Medical Center at Bowling Green by Butler County EMS and was accompanied by Deputy Reneer.