Poinsettias are a Holiday Staple 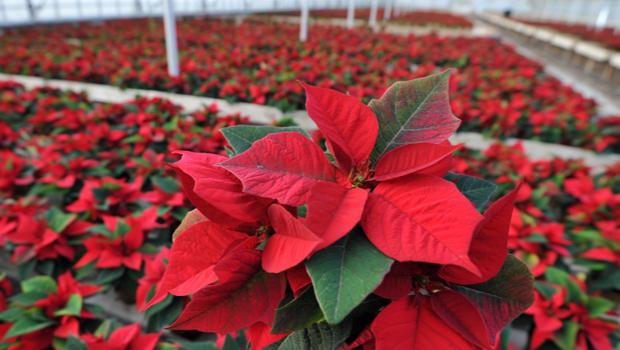 With their bright red, pink or white leaves, poinsettias herald the approach of the holiday season. They are beautiful as stand-alone plants or as components of bigger holiday displays. In the United States, we grow poinsettias as indoor potted plants, most in heated greenhouses, but you might be surprised to know that in its native climate, this subtropical species can grow to more than 10 feet tall.

The person responsible for bringing poinsettias to the United States was Joel Roberts Poinsett, a botanist, physician and the first U.S. ambassador to Mexico. December 12 is officially Poinsettia Day and marks the 1851 death of Poinsett.

Growers cultivate more than 100 varieties of poinsettias, but the red leaf variety is the most popular. Contrary to popular belief, poinsettias are not poisonous. The plant was cleared of this charge by the National Poison Center and the American Medical Association. A study at Ohio State University found that a 50-pound child would have to eat more than 500 leaves to have any harmful effect. However, the leaves have an awful taste, so you probably don’t want to make them part of your salad. It’s still a good idea to keep pets away from the plants, because consuming them can cause digestive upset.

More than 34 million poinsettias are sold each year, accounting for about a quarter of the sales of all flowering potted plants. Even though that may seem like a big money-maker for growers, production is a high-risk venture that has significant start-up costs and requires demanding labor and management. Growers must have a heated greenhouse structure. You can use tobacco greenhouses, but poinsettia production in late summer can compete with labor for tobacco harvest, housing and stripping.

The profit margin for most poinsettia growers is very low because of the highly competitive marketing environment of wholesale and retail markets like local garden centers, florists and grocers, roadside stands, farmer’s markets, fundraisers and direct sales from the farm. Another consideration is the short sale window of about six weeks beginning in early November.  Still, growers see a value in producing a crop of poinsettias, because it allows for spreading capital investments over the whole year versus having the greenhouse sit idle during later summer and fall.

Growers who cultivate multiple varieties can distinguish themselves a bit from the competition and have a market advantage.