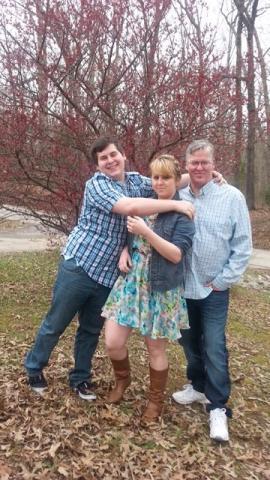 I have a propensity to get just a little disjointed with my thoughts, when in conversation with other folks. It is just the way my mind works, I do not think in a linear path, there are others like me, maybe not the majority but a sizable portion of the population, whom see patterns and connections in a “big picture” sort of way and we have our thoughts going around in a kind of circular direction, instead of in a straight line. What we are trying to convey is being pieced together from several different directions of thought and though it may make perfect sense, inside our heads, it may not come out altogether coherently.

One of the reasons I first turned to the written word to convey my thoughts is because it gave me the time to slow my ramblings down and piece together what I wanted to say, in a pattern other people could also make sense of, well that, and the fact that I”m a natural introvert, so was more comfortable not speaking. One such example happened a while back. In a conversation a group of us were having, an intelligent young man brought up a sensitive but important topic, I won't go in to the details of the conversation because it was private and needs to remain that way but I don't think he would mind me revealing that the topic was about child trafficking and children being scarred and damaged for life by a pedophile. Others gave their thoughts, some of them talking about abuse and violence in general. When I inserted my own thoughts the remarks about violence, neglect, abuse and trafficking were all in my head but I only spoke about how violence drastically changes a child forever and that I thought we as a society were somewhat more aware of that fact these days than we were in the past but the only way to eradicate violence against children from the face of the earth ,is to keep making people aware of the fact that it still exists. I had meant to tie that thought with the notion that the same held true for child trafficking and the most we can do is advocate awareness; that is how the world changes, but I did not tie it together, so it probably seemed like I was off topic but I still stand by my observation overall.

I appreciate people being able to tie a certain position or argument together. I have respect for people with views different from my own, if they can state their views either verbally or written, in a calm, coherent fashion, rather than just a disjointed amalgam of thought, which has absolutely no tie in with the original point or thesis. For instance (and this is just a silly example rather than tackling a serious issue like health care or the environment, right now) say someone says- Dogs make better companions than Cats! You hear that and immediately think, “WHAT? you're an idiot; I love my cat, I feed my cat every day, I buy her the best catnip, make sure she has a warm place to sleep; I love my cat!” Well, that's all well and good but you have not said one word about why you believe cats make better companions in general, just a bunch of stuff that has no tie in to your original premise, that the speaker is mistaken. If I was in education and a student turned in a paper, no matter if it had some valid points and was well written, if it veered off point from what their original premise was, it would not get a very high mark from me.

Whenever one off my children would ask me my opinion on something they had written, they knew that I would usually be harder on them than their teacher, because I looked at things like originality, creativity and staying on point. If I said it was a good paper, then they knew they usually could count on a good grade. Now, on the other hand, I did not look at things like if it was in the right format or if all sources were properly referenced, because to me, those so-called “core” concepts, utterly defeat the real purpose of education, which is to inspire curiosity, so they were on their own if prime importance was stressed on such matters. If just once, my child would bring home a syllabus or “class expectations” sheet which read, “It is the student's responsibility to keep an open mind and be receptive to the possibility of wonder in education and it is the educator's responsibility to do our best to inspire curiosity,” I would be thoroughly impressed, other than malarkey about being prepared and turning assignments in on time.

I believe our choice of words also matter when we are in conversation or when we are writing something other folks will read. I will sometimes tease our eldest child because she is in the habit of inserting either the word “technically” or the word “literally” into her conversation, on a very frequent basis. It like literally drives me crazy; no it doesn't, it just annoys me somewhat, I am not literally going crazy, unless you use a definition of -literally, which seems to have come into vogue lately. Now, technically there is not a lot of difference between the words- technically and- literally, the definition of technically means-according to exact meaning, strict conformance, narrowly defined, and the definition of literally means- exact, precise, without imagination, metaphor or allegory. So, being one who puts a whole lot of weight on imagination, metaphor, parable and allegory; you might accurately deduce that I do not have a lot of use for the word- literal. I looked at the second definition though (and this is a very recent occurrence) it has also simply come to mean- to add emphasis; as in “it was literally, a thousand miles away!” when actually, it was only a very great distance. My first reaction was, “What? that is not what literally means” but our youth have began using it this way so much that it is now accepted as proper vernacular. Youth, whom haven't learned any better yet, I can forgive but adults should know better. I also believe adults should not repeat words like- very, very or really, really- just to add emphasis, use grown up words, like dramatically or exponentially, instead of just repeating the same word, to describe something, otherwise it seems immature.

Our youngest child once took a few courses which involve traditionally tradesman skills. He did not really take them because he was seriously considering them for a vocation but because he, wanted "to learn how to do some things for himself.” He does not want to be dependent on others to do things for him and this is a trait I can admire. The same logic holds true, for thinking, in my opinion. You should not rely on others to do your thinking for you. Don't hold on to opinion and conclusions on subjects just because so and so said it was true during an impressionable time in your own youth or just because that's the way the people around you think.

I have changed my mind on quite a few opinions and convictions that I used to have, simply because I have went to the trouble of getting various viewpoints and I have examined and researched things for myself. As I have grown older, the things I am getting pretty firm on my opinion about are steadily increasing though. Not because I am growing more stubborn, for I have vowed to keep a child-like curiosity about the world but because I have simply had the time to research and examine things more thoroughly. I will gladly listen to contrary opinions and positions, they keep me sharp, but don't stand with a condescending smile as though you are privileged to information I don't have or don't insert anger into the conversation to try and sway me, it won't work.

Our purpose in this life is not to convince others how technically correct we are in our thoughts, ideas and opinions but to add more compassion to the world, than how we found it. Once we simply make enough people aware of this idea; we can change the world.