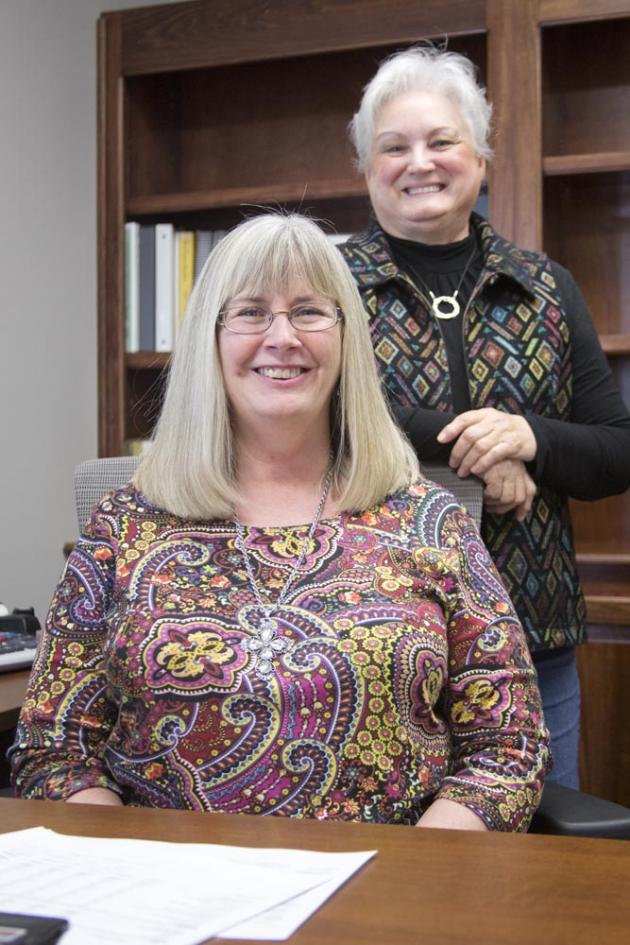 Monday, December 1, marks a transition in the lives to two women who have served the citizens of Butler County for three decades.

Suzanne Brosnan officially assumes the role of Butler County Property Valuation Administrator (P.V.A.) today, which means that outgoing P.V.A. Angie Pendley will be officially assuming the role of retiree.  It's a transition for which both ladies seem prepared.
"I feel so very blessed to have been able to serve the people of Butler County," said Angie Pendley, who had some trouble fighting back tears.  "I've always enjoyed working with the people and that is what I am going to miss the most."
One adjustment both will have to make is not working together.  With Pendley and Brosnan having 29 years and 33 years, respectively, in county government, the duo has been a fixture at the courthouse since David Martin was judge-executive in the early 1980s.
"We've seen our kids grow up together," said Brosnan.
Actually, Brosnan began her career when Wallace Dockery was judge in the late 1970s.
"I like my job and I'm too young to retire and go home," said Brosnan, who has spent the last eight years as chief deputy in P.V.A. office under Pendley.  Prior to that, Brosnan worked for two different judge-executives, David Martin and Hugh Evans, where she served as secretary, finance officer, and deputy judge-executive at various times.
Both ladies spoke about the many changes they have seen in how the P.V.A. office operates.

"Every P.V.A. that I can remember has made improvements in the office and that is the goal of anybody in this office," said Pendley.  "We live in changing times."
The P.V.A. office is charged with assessing property in the county for tax purposes.
"Nobody likes to pay taxes.  We don't collect taxes but what we do effects the assessments," said Pendley.  "I understand that people aren't happy sometimes."
A more complex, in-house mapping system, the ability to view tax rolls and property online, adding photos to property listings, and creating a more user-friendly experience are among the many changes and improvements the office has seen over the past eight years.  Pendley said adding photos was a "big undertaking" that her office began shortly into her first term.
"Jim Cartwright was a wonderful field person and he went quadrant by quadrant taking photos," said Pendley.
Pendley said she was also proud of the fact that her office has afforded young people a chance to get valuable work experience.
"We've given opportunities to young people to come in here, work, and move on," said Pendley.
Recent remodeling due to the departure of the Butler County Ambulance Service to a new location has given the P.V.A. additional space, a change that Pendley says has given people more room to inspect records.
Pendley said her husband, Stan, has been retired for four years and that one of her retirement plans was to "break his playhouse up."  Other plans include spending time with their three small grandchildren, caring for their elderly mothers, and "a little bit of traveling in the U.S. within our church framework."
"We want to enjoy the health God has allowed us to have," added Pendley.
As far as Brosnan taking over for her, Pendley says she feels "doubly blessed."
"I feel like the people have made a wise choice," said Pendley.  "It's going to be in good hands."

For her part, Brosnan will begin her tenure with mandatory week-long training held in Covington, Kentucky for all new P.V.A.s.
"I'm tickled to be working for the county," said Brosnan.  "Feel free to come by our office.  We're more than glad to help you any way we can."

A retirement reception was held on Wednesday, November 26, for Angie Pendley.