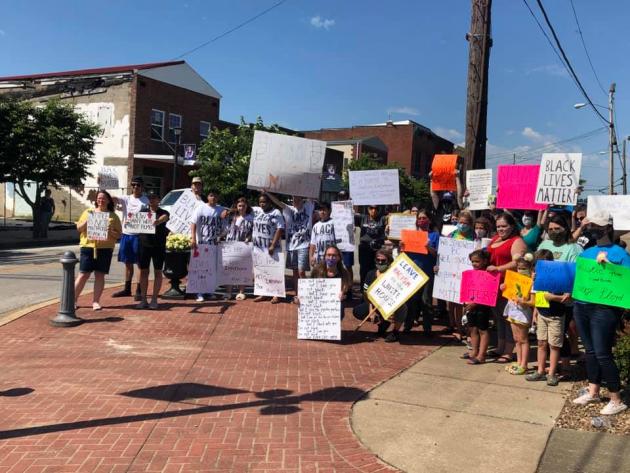 “Black Lives Matter!” “Justice for George!” These chants and others could be heard on the Butler County Courthouse square in Morgantown, Kentucky on the afternoon of June 2,  as protestors gathered in response to the recent killings of black Americans Ahmaud Arbery, Breonna Taylor, and George Floyd - a man killed by white Minneapolis Police officer Derek Chauvin  on May 25. Three other officers were involved as well.

The Morgantown protest was organized by Missy Graehler and Tina Duffer, both of Morgantown, as part of the Black Lives Matter movement that is currently sweeping the nation. Unlike some protests and demonstrations occurring in other cities that have been hallmarked by violence and property destruction, the Morgantown protest remained peaceful and mostly civil.

Organized speakers included Wanda Nevins and Bro. Derek Cain, both of Morgantown. Nevins spoke of raising black children in America, specifically on having “the talk” – a discussion of how to behave during an interaction with police officers, particularly for young black men.

A pastor at Salem Baptist Church, Cain was asked to pray at the event. He began his remarks by saying, “It’s my job to have words…and I hardly have words.” Cain praised the work of the peaceful protestors claiming that, “This is good work! This is holy work!” After his remarks, he led the crowd in the gospel hymn turned protest anthem, “We Shall Overcome.”

Another local faith leader present at the event, Ruth Morgan of Morgantown Church of the Nazarene, commented on the importance of listening rather than trying to respond to the message of protestors. “They’re trying to tell us something that we should listen to. As long as we’re talking, we’re not listening to them.”

As the protest continued, conversations about experiences from the local community began throughout the crowd. A group of eight current and former Butler County High School students explained their experiences with racism both at school and throughout the community to a local high school teacher – hearing racial slurs yelled down the hallways of the school, seeing nooses hang from a tree in the Dunbar area, even seeing other students mock the current protests on social media videos. Initially, the teacher, who was not a participant in the protest, left the event.  However, he returned a few minutes later and listened to the students, and remained at the protest engaging in discussion with the youth at the event.

The students shared that while they feel that racism is alive in Butler County, they are hopeful that events like this protest will open dialogues that help unite the community, rather than divide it. One student stated that they hope that life looks different for future young people in Morgantown, while another shared that he hoped events like this would let the “shy, non-racist” folks in the community know that it’s ok to speak up.

As the protest continued and grew in size to 30-40 people, the protestors lay face-down on the ground with their hands behind their backs in silence for nine minutes – the same length of time that George Floyd was restrained and knelt upon by Chauvin before his death. Afterwards, Morgantown Police Chief Giles Taylor engaged in a positive discussion with the protestors about the mentality that “all cops are bad.” While he condemned the actions of the Minneapolis officers on May 25, he shared that there are also good people in the profession.

“The man who killed George Floyd should not have been a police officer…but we don’t teach that here,” said Taylor,  referring to the technique of kneeling on the neck of an individual in custody.

Overall, the protest event was a peaceful event that opened up discussions between Butler County citizens on topics of race, police interactions, and unity.