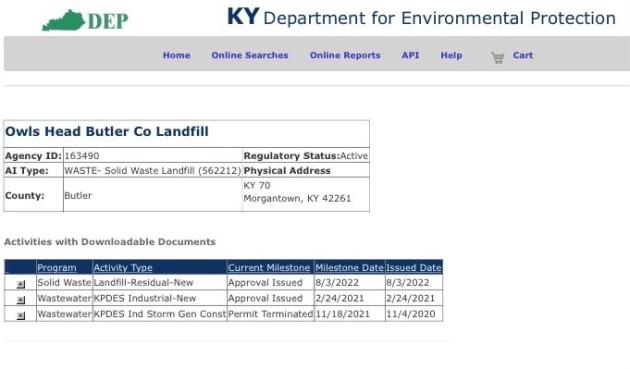 After three years of controversy and significant local opposition, the Kentucky Department of Waste Management has finally approved the construction of a new solid waste landfill (residual) at a location on KY 70 West (Rochester Road).  Owl's Head Alloys had initially applied for the landfill in 2019.  Following a lenghtly legal application process and a local comment period, final approval was given on August 3.  The landfill has been opposed by a local citizens' advocacy group - Butler County Stop the Landfill.

Frank House, one of the leaders of the BCSTL group, said "we have lost the battle but we have just figured out what the war really is."

"The next step would be to assess the final permit and the response to comments in order to determine whether there are grounds for an administrative appeal to the Office of Administrative Hearings of the decision to issue the permt," said House.

In a Facebook post, House expressed his appreciation to all the individuals who have supported the group's efforts.

"We, BCSTL, want to thank everyone for your support, determination, and dedication.  We are not done.  Litigation is certainly an option and we have been exploring the various legal avenues.  Contact your elected officials and ask them what they are doing to prevent a third, or a fourth, or a fifth hazardous waste dump from coming uninvited to our community," said House.