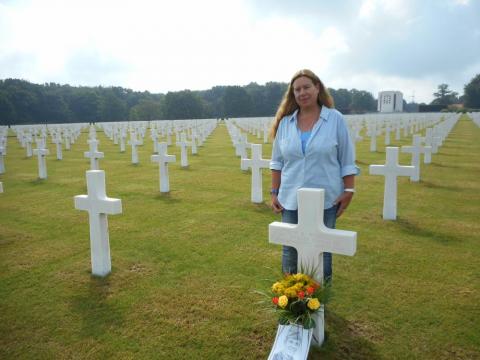 In the early summer calm of a June Butler County morning.  Danielle Roubroeks from Edegem, Belgium caused a small stir.  Danielle had e-mailed the Butler County Courthouse and Beech Tree News in search of anyone who could give her information on former Butler County citizen Otis E. H. Beliles and any family still residing here.

Otis E.H. Beliles enlisted on 21 December 1942 in Evansville, Indiana.  Otis was a private in the Army he went missing in action on October 21 1944.  The American Graves Registration Command of the European Zone investigated the area and found all but 4 of the missing men from his regiment.  His remains were declared “non-recoverable”.  Otis was declared dead one year later on 21 October 1945 Otis E.H. Beliles was recipient of the Bronze Star and the Purple Heart with Oak Leaf Cluster.

Otis’s name is one of 1, 722 on the Wall of the Missing: there are 8,301 Burials, 178 Star of David, 6 Medal of Honor recipients, and 40 sets of brothers names on the wall.  Each of these veterans is a Purple Heart Recipient.

The Netherlands American Cemetery and Memorial is the only American military cemetery in the Netherlands.  The cemetery site has a rich historical background and was dedicated July 7, 1960 it covers over 65.50 acres.  This is but one of 14 permanent American military cemeteries on foreign soil whose over seer is the ABMC the American Battle Monuments Commission, established by the Congress in 1923, is an agency of the executive branch of the federal government.

Back to Danielle and Otis…. Jennifer Odle and I received calls from the court house and I received an email from Diane Dyer inquiring what this was about.  My first reaction to get in touch with Lois Russ who has her fingers on the pulse of every veteran from the  Butler County Revolutionary War till today.  Having been in the Netherlands and to the American Cemetery I was anxious to get in touch with Danielle and we have started a correspondence.

Danielle’s interest in World I and II was planted by her Grandfather’s stories and the respect he had for the liberators was passed on to her.  She and her husband traveled all over Europe and visited many sites pertaining to the wars.  Only the American Cemeteries have this idea of adopting a grave.  So they filled out the papers and it takes awhile to be approved in the meantime her husband passed never knowing the results.  Danielle now does this on her own and says she finds it most rewarding.  Plus Otis in the Netherlands she has adopted 3 other soldiers 2 from World War II American Cemeteries in Belgium.  The third is in a cemetery you have heard us talk about before, World I “Flanders Field”.

Personally had never before heard of this program and was very interested to find out how it worked.  Danielle explained adopting a grave is free of charge; however, you have to engage yourself in visiting several times a year and put flowers, also attend services on Memorial Day and other remembrances.  You have to respect the guidelines, put only fresh flowers in a vase with a pin so you do not destroy the grass and it is forbidden to put anything on the stone because it is treated with special product so they will stay clean.  All the rest of the maintenance is down by the ABMC because there is strict uniformity.

Find it interesting that The American Battle Monument Commission ABMC does not run the adopt program.  Two of the cemeteries in Belgium are run by “Le Briscard” a group of Belgium veterans.  “Flanders Field” is taken care of by the American Legion Post BEO2.

It is with pride and pleasure we take part in honoring Joshua O’Driscoll today whose Mother, Lynda is a BCNSDAR member, Historian and chairman of our Project Patriot. The O’Driscoll family could not ask for a prouder Mother of her son’s service to their country or one whose heart beats red, white and blue!

Today we remember all Purple Heart recipients and their families many like Otis Beliles may not even know where there love ones final resting place is.  How heartwarming it is t think that people like Danielle are taking care of those we cannot.  Otis and Joshua remind us that young patriots are still serving their country with pride and have been doing so since the American Revolution.

This brings us full circle and would like to close with a note from Danielle; I wrote to her and told her about the Purple Heart Ceremony and that I wanted to share Otis and her involvement and she wrote back and asked if I would share this with you.

"I love doing what I do and it is an honor to take care of the last resting place of a soldier that gave his all so we now live in a free and good Belgium.  It is only a small gesture to place flowers and attend ceremonies.  I know this may sound mushy but it is the truth and I cannot say it any other way"...  Danielle Roubroeks from Edegem, Belgium

Editor's note:  This article was written and shared by Jane Eaton Henderson at the Purple Heart Ceremony on Saturday