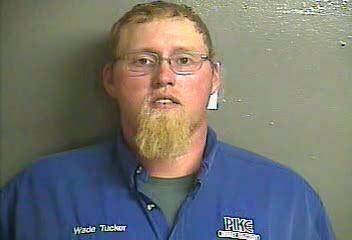 Nathaniel W. Tucker, 25, of Horse Branch, Kentucky, has been charged with murder of a four-year-old child, criminal abuse, first degree with children under the age of 12, and assault first degree.

According to police Tucker severely beat three children on Saturday.  He was watching Samantha Oakley's children at their home in Hartford.

On Monday the four-year-old was removed from life support at Cincinnati Children's Hospital and later died. The three and five-year-old suffered injuries ranging from bruises to fractures.

The children's mother Samantha Oakley, 23, of Hartford, Kentucky has been charged with criminal abuse, first degree, child under 12. Police say Oakley may have known of the abuse and failed to properly report it.

Tucker and Oakley were arrested on Monday and lodged in the Ohio County Detention Center.

The investigation is ongoing and under the direction of KSP Post 16.

Submitted by Jonell Fields (not verified) on Tue, 23/10/2012 - 8:00am
This makes me sick to my stomach. There is NO excuse for harming a child in any kind of way, and in my opinion these two and any other that brings harm to a child should never see freedom again. My thoughts and prayers go out to these children. There are too many people in this world raising children that have no business doing so!!!!!
Submitted by Marecia Chandler (not verified) on Tue, 23/10/2012 - 1:26pm
This is absolutely horrible! In my opinion, the mother should be charged the same as the man.God bless those children.