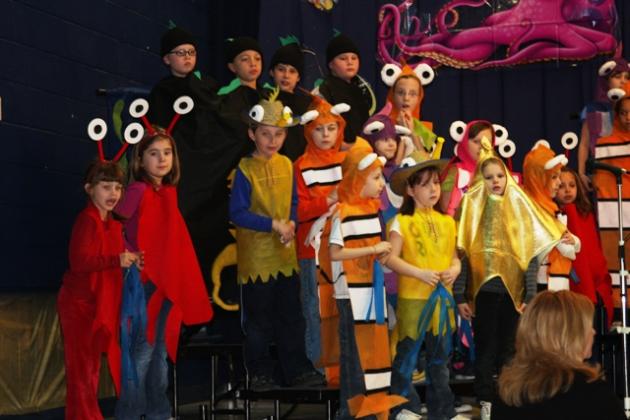 GO FISH, is the name of the musical performed by the second graders at North Butler Elementary School on Tuesday night and again on Wednesday afternoon.
“We are very proud of our second grade students, they have worked so hard,” said Principal Elaine Daugherty, as she welcomed everyone to North Butler.
The musical featured a little tiger shark, played by Bailey West, who wanted to be friends with everyone in the ocean.  Along the way he meets a bunch of friends who also have their quirks: a seven legged octopus, an angel fish, a clown fish who isn’t funny, a needle fish, a star fish, a tuna and so on.  During the course of the musical all are reminded that is takes all kinds of fish to make the ocean a beautiful place and all kinds of people to make the world the same.

Submitted by Deniece Hawkins (not verified) on Fri, 03/09/2012 - 9:41am
Great play!!! It was so cool!! The kids did a great job and thanks to the directors. We really enjoyed it.
Submitted by Phyllis Tate (not verified) on Fri, 03/09/2012 - 3:19pm
Things like this musical are what will be lasting memories in the mind of all involved. These students will NEVER forget their involvement in this endeavor which was directed & produced by the full time Music & full time Art teachers @ N.B.E. IT IS SUCH A SHAME WHEN teachers as talented as Mrs. Crowder & Mrs. Decker WILL HAVE TO ENDURE BUDGET CUTS NEXT YEAR AND WON'T BE ABLE TO DO A PERFORMANCE OF THIS MAGNITUDE WITH ANY OF THE ELEMENTARY STUDENTS FROM NBE OR MES. Mrs. Crowder won't even be the Music teacher next year & Mrs. Decker will be busy dividing her time between MES & NBE. Some of my memorable moments from teaching elementary students for 27 yrs. were when the students were involved in a performance which took in all subject areas not just music & art. It was such a wonderful experience to find out that the student that didn't read very well could sing well & the student who barely spoke a word without prompting could bellow out a dramatic part on stage. That is the one time when all students can take a part in a production & really find their niche. Congratulations to all that had a part in this production!