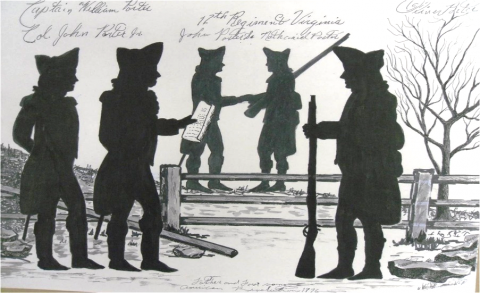 John Porter, Jr., my 5th great grandfather, was born in 1759 in Prince Edward County, Virginia. He was the son of John Porter, Sr. and Mary Polly Anthony who came from Belfast, Ireland. John, Sr. and four of his sons served in the American Revolution; sons who served were John Porter, Jr., Captain William Porter, Nathaniel Porter, and Oliver Cromwell Porter.

John Porter, Jr. served in the 5th VA Regiment of the Continental Line February 1776-77 commanded by Cols. Scott & Parker, crossed the Delaware with Washington (26 Dec 1776), transferred to then Col. Daniel Morgan's Rifles in May/June 1777- fought at Freeman's Farm (19 Sept 1777); present at Burgoyne's surrender at Saratoga (17 Oct 1777); at Valley Forge when enlistment ended Feb 1778; re-enlisted 1780. Participated with brothers William, Nathaniel and Oliver in the 1781 Carolina Campaign of Gen Nathaniel Greene as part of Gen Morgan's division. Morgan had resigned in 1778, but rejoined in 1780 with promotion to meet crisis in the South after the defeat of Gen. Gates at Camden SC (16 Aug 1780). Campaign included: Cowpens (17 Jan), Guilford Court House (9 Feb), Siege of Ninety-Six (May-June), Eutaw Springs (8 Sept) and Yorktown (28 Sept-19Oct) and attaining the rank of Capt. or Colonel in the militia later. (His tombstone has the inscription Col. John Porter.)
In the late 1790s, he moved to Kentucky and settled in Butler (then Logan) County about ½ mile from his brother William, and about 1 mile from Sugar Grove, on the Little Muddy Creek.  After reaching KY, John Porter, Jr. and his brothers were instrumental in naming the Butler County seat "Morgantown" for Gen Morgan. John Porter, Jr. was elected to six terms as representative to the KY House of Representatives - first for Logan then Butler Counties.

John was married to Sarah Sally Clark, daughter of John Clark who also served in the revolution. Among John’s children was Benjamin Clark Porter, my 4th great grandfather, who was the father of Clark Thomas Porter I. Benjamin and some of his family migrated to Texas where he died in Burleson County near Porter’s Prairie. Clark Thomas remained in Kentucky and while married to Margaret Ellen Austin had Robert Benjamin Porter of the Eden community who was the father of Clark Thomas Porter II, my grandfather.

John Porter, Jr. died on September 24, 1833. He and his wife Sarah Clark Porter are buried in the Porter Cemetery in southern Butler County, Kentucky. His death was reported in the Frankfort, KY news:  “Col. John Porter, the member elect to the House of Representatives from Butler and Edmonson counties, died lately at his residence in Butler county. Col. Porter was one of those active Revolutionary worthies, who aided in securing to us the blessings of National Independence.” --The Commonwealth (Frankfort, Kentucky); 15 Oct 1833

America 250! When you join the DAR, you enter a network of more than 185,000 women who form lifelong bonds, honor their revolutionary ancestors and promote historic preservation, education and patriotism in their communities. The goal for the next few years is to increase the membership to 250,000. In an effort to further that initiative the Butler County Chapter NSDAR will be submitting a series of articles about our Patriot ancestors.