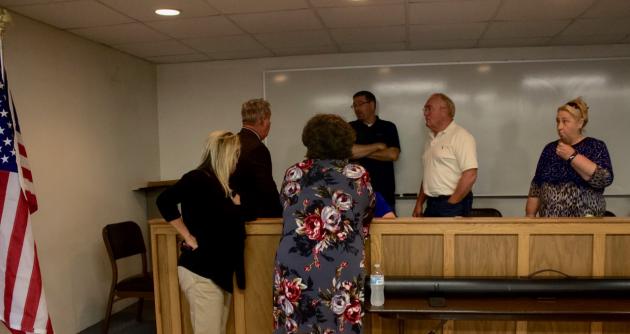 The treasurer’s report given by Eric Elms showed a beginning month budget of $1,699,974.55 and an ending balance of $1,525,270,59. Special guest Darell Dockery was present and announced that it was his last day as president of the Kentucky Retired Teachers Association and discussed their success throughout the past year. Dockery shared that the KRTA of Butler County received the highest honor of Gold Standard out of Kentucky. He said that this was in part due to the backing of the board and the excellent teachers and their involvement in the school systems. He went on to thank the superintendent and board for their efforts and announced that on behalf of the Kentucky Education Association (KEA), he was presenting them with a new American Flag and Kentucky Flag for their room as a show of gratitude.

The superintendents report discussed briefly some of the month’s activities including his board meeting with Todd County and GRECC Board of Directors and the success of this years 2019 Butler County Graduation. He also announced that it would be Sarah McKee, Exceptional Ed. Coordinator and Preschool Coordinator's last day on the board. He also announced that former Butler County graduate Laura Hunt would be joining in work with the school systems and P.E. classes at the elementary schools in the fall. Hunt will aide in creating an asthma education program at the elementary schools as part of her nursing degree at University of Kentucky.

“If even 10 percent of those kids truly need those meals, then it has been well worth it,” said Fifth District School Board Member Ryan Daugherty.

The Early Childhood Conference in Lousiville, KY will take place next week. A report was to be given on Property, Fleet, General Liability, Errors and Omissions, Umbrella, Inland Marine and Workman’s Compensation. Hocker Insurance Lead Agent Gina Tynes was present to discuss information on the following, however she informed the board that the numbers had not yet come back. She provided a comparison chart to the board members and was able to speak on fact that the Workman’s Compensation Insurance had decreased, and the loss ratio was improving. Tynes apologized for the delay and assured the board that she would get back to them with more information soon.

Jimmy Arnold, Chief Information Officer of Butler County Schools' discussed the remaining items in this section concerning the school budgets, transportation, and updates on the school facilities and technology. Arnold said that over $1 million in bonding is currently available and that with his calculations, boding would jump to around $12 - $14 million in the year 2026. Issues that needed attention under facilities included a large project at Morgantown Elementary with additions including special ed, kitchen cabinets and updates to the music room. Another major need discussed was a stairwell at Butler County Middle School that would total $84,000.

Arnold also discussed the need for repairs to the middle and high school gym roofs and the possibility of adding a student drop off area at Butler County Middle School. HVAC upgrades and code improvement at Butler County High School were also mentioned as well as the future concern for the North Butler County Elementary School parking lot. Arnold discussed that because the building was not yet 15 years old, they would not be able to receive approved funding for repairs which will include the grinding and sanding down and repainting of the parking lot. Arnold said with these numbers, the total costs would bring them to $21 million in need.

Under technology, Arnold discussed the need to limit spending as much as possible to save up for future upgrades to infrastructure. He said these upgrades will likely occur within the next two to four years.

For the Consent portion of the agenda, Superintendent Scott Howard added seven new items for approval consisting of the hiring of multiple positions in the schools.

The following items were approved:

Approve Authorization for Application for Federal, State, and Private Grants for the FY 20 School Year

The Student Support Services portion also consisted of the addition of items including the approval of Jeff Jennings as the School Safety Coordinator and the approval of the hiring for Butler County Middle School Volleyball and Soccer coaches. The first item in this section held the most discussion regarding the approval of the 1st reading of the Fiscal Year 2020 KSBA Recommended Policies and Procedures Updates. Chad Flener listed some of the things falling into this category including active shooter training, tobacco policies and the implementing of signage. After McKee later asked if vaping was included in the policy, Flener confirmed that it was. Other updates will include the display of the national motto that will be required to be present in all Kentucky schools starting this 2019 – 2020 school year.

Lastly, the new sick policy for teachers was discussed. Superintendent Howard explained that beginning on July 1, any personal, emergency or sick days used by staff will now result in the signing of an affidavit verifying that they are using their time off for a legit reason. Howard discussed wanting to have a notary present at each school. The large number of “sick outs” from the previous school year was more than likely the main driver in this implementation according to Howard. A question was later posed regarding if a teacher was to become ill the day of classes or without notice. Howard stated that if a teacher sees a doctor and provides a note, that they will not be required to sign a form.

Another important item discussed was the approval of the 2020 fiscal year salary schedule for teachers. Eric Elms spoke on the information that he had prepared for the topic stating that teacher raises need to become a priority, even if it means cutting back on other things. He discussed how teachers in this area deserve a raise just as much as anyone else and that in order to keep educators employed in the school system, that something will need to change.

“Our teachers work just as hard as any other teacher in other districts and we’ve got to do something and if that means we’ve got to really cut back and watch what we’re doing a year from now, then that’s just what we have to do,” said Elms.

Elms also stated that looking back on records, if he were to provide an estimate, it would show that there has been what is more than likely a less than 2 percent raise for teachers in the past eight to 10 years.

All other items approved include the following:

Approve One Year, Emergency and Provisional Certification for Teachers of Specified Areas of Shortage in Order to Fill Unanticipated Vacant Teacher Positions for the FY 20 School Year