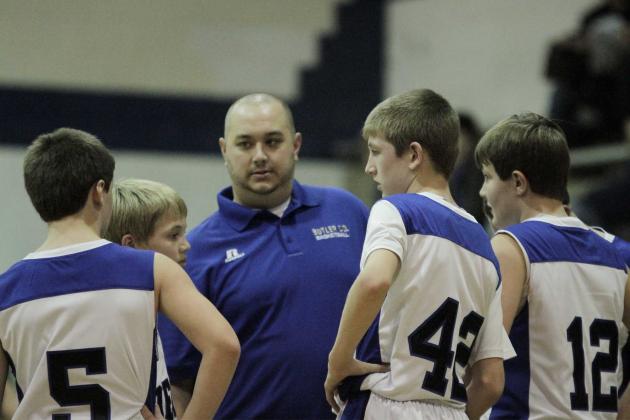 On the heels of round two of expected inclement weather, the BCMS Bears were only able to get in one of their three scheduled games last week.  Spurred by a victory the week before, the Bears were anxious to get on the floor again and keep their winning streak alive.  They did just that on Monday night when the Edmonson County Wildcats came to town.  The Bears had traveled earlier in the season to Edmonson county to split with the Wildcats with the 7th grade picking up a win and the 8th grade losing by 9.  So was not to be the case on the Bears’ home floor.  Both teams were able to capture a victory and left the Wildcats wondering just what had happened to them on their trip to Butler County.

The 8th grade team squeaked out a win after a hard fought battle from beginning to end with a score of 39-37.  The Wildcat’s strategy to start the game was to shut down Will Moore who had had a phenomenal game for the Bears when they went to Edmonson County scoring 27 points.  With the attention on Moore, Brennan Grubb was able to knock down a quick 2 and 3 to start the game.  The Bears kept it tight throughout the first quarter before the Wildcats found some spark toward the end of the first half to pull out to an 8 point lead at halftime.

Coach Donaldson used his entire halftime break in the locker room preparing strategy for the second half.   The Bears came out the second half with an on fire Brendan Shanklin leading the way for the Bears.    He threw in 4 points the third quarter, but his rebounding and blocking out was what sparked the team’s comeback.  With a strong outing in the third quarter by the team as a whole, they were able to make up the halftime difference and were tied 35-35.   The fourth quarter was a nail biter.  A key steal by Caleb Beasley with less than a minute left on the clock, who played some very good defense himself throughout the game,  was pivotal for the Bears.  It was a defensive battle throughout the fourth quarter with the Bears only being able to put 4 total points on the scoreboard; however, it was just enough because they only allowed the Wildcats to score 2.

Leading scorer for the Bears was Will Moore with 11.  Also scoring was Brennan Grubb with 10, Brendan Shanklin 8, Caleb Beasley 4, Houston Hampton 2, Skyler Moore 2, and Easton Phelps 2.

The 7th grade team dominated the Wildcats from start to finish under the direction of the scoring duo on Justin Elms and Colton Bratcher who contributed 10 each to the win.  Sage Graham was quite possibly the quiet dominate force of the night who led the Bears in rebounding, played outstanding defense, scored 4 points.  Others scoring for the Bears were Sam Burns, Parker Rice, Lucas Flener, and Zack Smith all with 2 each and Trevor Dockery with 1.  The Bears won with a score of 33 – 17.

The BCMS Bears will travel to Russellville Thursday night.