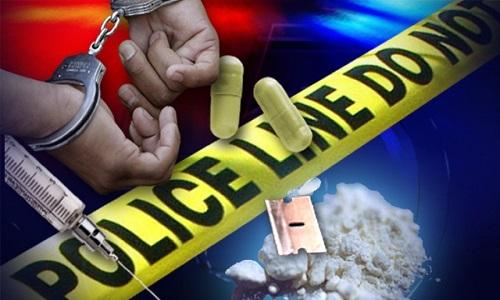 On April 4 at approximately 3:00 pm, the Morgantown Police Department was dispatched to Subway Restaurant for an unconscious female in a maroon SUV in their parking lot. After several attempts to wake the individual and thru subsequent investigation, the subject Rachel Hunt, age 40, of Morgantown, KY, was arrested.

Miss Hunt had a suspected meth pipe, a syringe with a needle loaded with suspected methamphetamine, a counterfeit/forged $100 bill, and several vehicle operators licenses. Drug paraphernalia was also located during the search incident to arrest.

Hunt is charged with: Public intoxication, possession of a controlled substance drug unspecified, possession of multiple licenses (No person shall have more than one operator's license), and Drug Paraphernalia.

Hunt was lodged in the Butler County Jail.

The officer was recalled to the jail when the jail's intake booking search revealed more drugs hidden on her body, resulting in additional charges.