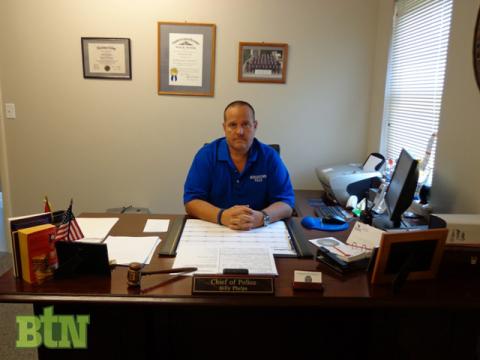 "This is a really, really stupid idea."  With those words, Morgantown Police Chief Billy Phelps made clear to Beech Tree News where he stands on the possibility of the Morgantown Police Department being disbanded in favor of the city contracting with the Butler County Sheriff's Department for police services.

Chief Phelps, a 25-year veteran of the department and former U.S. Marine, sees multiple operational problems — ranging from financial, political and practical.  However, Phelps want to make it clear that his concerns have nothing to do with protecting his job but rather are centered on his law enforcement experience in general, and specifically his time with the Morgantown Police Department.

"I am retiring this year so this plan would not affect me in any way," said Phelps.  "I just see a lot of potential problems here involving politics, changes in leadership over the years, including mayors, council members, and sheriffs."

Chief Phelps tackled the 20-year hazardous duty pay head-on, saying the city cannot get out of this arrangement if it decides in the future to bring back the department.  "The positions have been classified as hazardous and that's not going away," said Phelps.  Also, the chief said the costs would be tremendous if a future mayor/council and sheriff/fiscal court want to opt out of the plan, a possibility that should be considered.

According to Phelps, the MPD was "grandfathered in" in regard to some requirements that would be problematic if the department was eliminated and then wanted to be brought back.

Chief Phelps also sees the revolving door of politics as a potential problem.

"Sheriff Scottie Ward is a fine sheriff who does a great job but he will not always be sheriff," said Phelps, who echoed similar comments about the mayor and city council.  "People in these positions change and if somebody wants out of this arrangement then the city could find itself in a bad position with trying to retrain and rehire a police department," said Phelps, who added that over the years there have been multiple mayors, council members, judge-executives, magistrates, and sheriffs but that the Morgantown Police Department has remained the same, essentially unaffected by the political change.

"What happens if the next sheriff decides he wants other deputies," asks Phelps.  "There is a difference in longevity between city officers and deputies and that could cause problems."

Though both are law enforcement agencies, Chief Phelps said a city police force serves different function than a county department.

"We have different jobs and a city department can address issues specific to the city in a way that might be difficult for a county department that is responsible for a much larger area," said Phelps.

The chief stated clearly that his critique of this possibility is not based on protecting his job.

"This doesn't affect but I am concerned about how this could affect the MPD and the city," said Phelps.  "I've spent over 20 years working to create a good, professional police department for the city of Morgantown.  We have exceptional, well-trained officers who work hard to make Morgantown a better place … and city residents expect to have a local police department."

Chief Phelps also stated that neither the mayor nor council has spoken to him or any officers with the MPD about this plan.

Phelps said politics may be playing a role but in a different way.  "This is not a fix," said Phelps, "it's funny that this is coming around now in an election year."

As chief-of-police, Phelps said his focus is and will remain the city of Morgantown.

"I'm looking at loyalty to the city, not county," said Phelps, "and keeping a city police department is what I think is in the best interest of Morgantown."