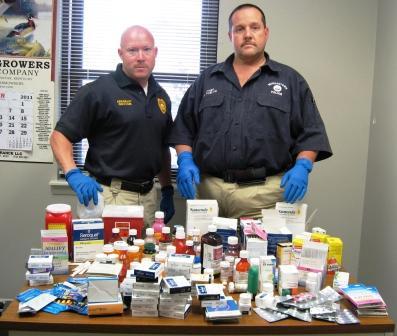 The battle against drug use and abuse is an ongoing struggle by law enforcement officials and that struggle includes more than methamphetamine use, which gets most of the attention.  According to Morgantown Police Chief Billy Phelps, his department is actively trying to help citizens dispose of old or unneeded legal drugs and medications so they don't end up in the wrong hands.
For the third time this year, the Morgantown Police Department is disposing of unused and unwanted drugs that have been left at the Police Medication Disposal Box.

"This is a good way for the community to dispose of old or unneeded drug," said Phelps.  "There are environmental concerns about the safety of "flushing drugs," as some people are questioning the practice because of concerns about trace levels of drug residues found in surface water, such as rivers and lakes, and in some community drinking water supplies."

Phelps said the MPD is taking all unwanted drugs and disposing of them according to FDA and the Office of National Drug Control Policy.

"If we can help our community dispose of any, then that is one less pill that could possible end up on our streets in our children's hands," added Phelps.

Submitted by Anna-Laura Hocker (not verified) on Thu, 10/13/2011 - 12:55pm
I think this is a good service to offer to the community. Most people have medicine cabinets full of stuff that is outdated, no longer needed, etc. I hope they continue to do this for the community.