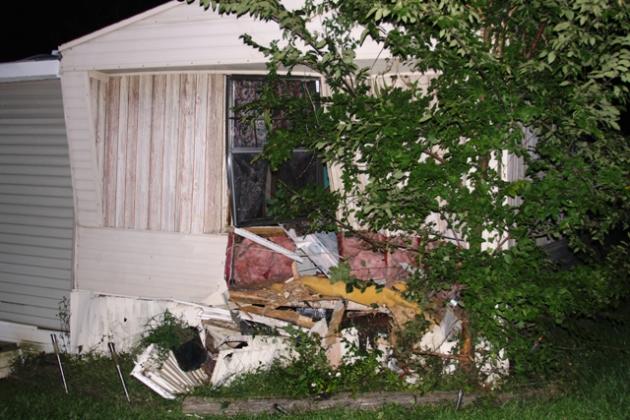 A Morgantown man is in custody tonight after he drove his pick-up truck into a mobile home. Edward W. (Eddie) Hall,58, of Morgantown, was arrested earlier tonight after his vehicle left the road and crashed into a mobile home at 167 McKendree Chapel Road.  The owners, Gary and Beverly Dalton, were in the home at the time but were not injured.  After failing a field sobriety test and breathalyzer, Hall was placed under arrest for driving under the influence of alcohol and placed in a Kentucky State Police cruiser.  Air bags were deployed in Hall's truck.

According to Dalton, Hall was attempting to back up and leave when he (Dalton) stopped him.  Hall, according to Dalton, said he was just going to get his wife.  After running out into the yard following the incident, Dalton started experiencing chest pains and was checked at the scene by Butler County EMS.

Hall was taken to the Butler County Jail and charged with DUI, second offense, and open container in vehicle.

Submitted by Cindy Dalton Lyon (not verified) on Thu, 13/09/2012 - 3:54pm
This is crazy this guy should go to jail for attempted murder. Gary Dalton is my brother and our own father was killed by a drunk driver in Butler Co. when I was a child. Now one almost took out my brother and his wife.