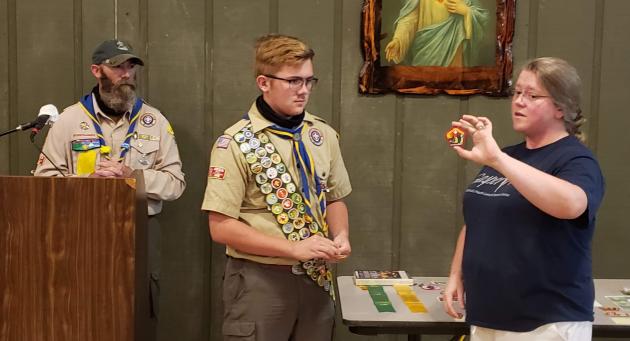 Scout Leader Kyle Coleman was finally able to get most of the scouts together Thursday, August 27, at the Gasper River Catholic Youth Camp.  Each family had a separate table and temperatures were taken.  Masks were worn as an added precaution.

2020 has proven to be a very trying year for all organizations but the Scouts’ Motto is   “Be in a state of readiness in mind and body to do your duty.”

The scouts have been able to earn some in-person merit badges and had to complete some virtual on-line badges because of the health restrictions.

Scout leaders believe that the boys should lead meetings to give them valuable experience for when they enter the workplace. Don Elmore, who is working on his Communications Badge, was selected to lead the ceremony.

Eagle Scout Taylor Miller (above) passed his Eagle Board of Review on June 18.   He will be 17 in October and is a Junior.  In his scouting career he has earned 78 badges;  there are 21 required badges to become an Eagle Scout, which the national average is only six percent of scouts actually making it to Eagle status. Patrick and Dawn are Taylor's proud parents.  They have helped him and guided him but it is up to the scout to do the work. Taylor will now start receiving Palm Awards for all his extra badges.

Kyle and Alex Coleman were fortunate to go on a six-day, five-night canoe/camping trip in Minnesota with scouts from the Edmonson County Scout Troop 597. Their trip covered 76 miles of the US / Canadian Border waters; they had all their food and gear in the canoes. They arrived in Minnesota on July 3rd and besides seeing amazing wildlife and scenery, they participated in a water clarity conservation project.

Jared Hudnall has been busy with shooting sports at the Butler County Extension Office, including archery, rifle, pistol and shooting trap at the Butler County Conservation Club. Besides building birdhouses and feeders, he has made a wooden flag out of wood for his grandfather , Mike Hudnall , with whom he enjoys working on old cars.

Cayden Taylor earned seven virtual on-line badges and three in-person badges.  He enjoyed interviewing Mr. David Hocker, former Scout Leader.  Cayden also interviewed Eagle Scout Pastor Derek Cain about scouting heritage. For his fishing merit badge he had to catch , clean and cook the fish, which he enjoyed doing. Cayden was disappointed that the state archery tournament was canceled but he is looking forward to playing on the middle school football team.

Don Elmore has been very busy;  he earned five virtual on-line badges which some of them started out in-person but finished on-line because of the restrictions. Don has also finished eight in-person badges this year.  His favorite was the rifle merit badge with his dad, Scott, who is also a Scout leader. Don has probably hiked over 300 miles in the past two years and has been fortunate enough to visit twenty of Kentucky's State Parks. He also plays the drums in a teenage band at the Bowling Green Rock Band Academy.  Don has been receiving drum lessons from John B. Givens.

Many scouts went on a twelve-mile night hike on the Central City Rail Trail in July.

In September, the first troop camping trip of the year will be at Nolin Lake.  They will be kayaking, hikink, swimming and fishing.

Scouts can earn their White Water Rafting Badge in Tennessee this October.

The Boone Doggle, in November, is a camping trip in Ohio County where they compete with other troops in cooking, tent set up , fire starting and other events.