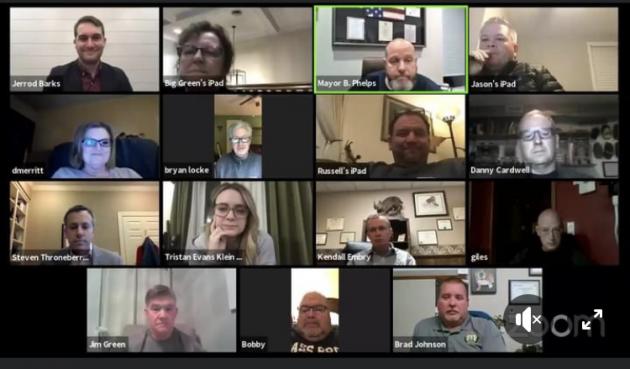 Morgantown City Council met in a special called meeting on February 11, via Zoom, online. After a call to order, invocation, the Pledge of Allegiance and determination of a quorum, the council approved the minutes of the January meeting. Councilman Russell Givens made a motion to approve them and Councilman Jason Gaskey seconded the motion. It passed unanimously.

Next, the Council heard reports from several groups. The first report given was by Jim Green from the Utilities Commission. Green explained that the 2020 audit of the Morgantown Utilities System was “clean” and “the highest score that could be received.” He went on to praise all of the utilities staff for not only their work in preparing for the audit, but also for their hard work and service year-round. He then reported that at a recent meeting of the commission, the group discussed maintenance of the natural gas system. He indicated that they would soon present a plan to the Council regarding maintenance of the existing system. Councilman Givens asked if the plan would include expansion. Mr. Green then indicated that he would get back to the Council on that.

Next to report was Danny Cardwell from Planning and Zoning. He shared that a recent special called meeting the committee elected officers for 2021. Elected were Danny Cardwell, Chair; Rick Scott, Vice Chair; Patty Craig, Secretary; and Jody Forgy, Commissioner. He then indicated that a vacancy left when Bryan Locke became a councilmember, would be filled later in the City Council meeting.

Bob McKee, of Code Enforcement, presented next. McKee explained that several Alcohol Beverage Control license fees had come in and that he has been working with City Administrator, Jerrod Barks, to increase organization in collecting these. He also indicated that he had recently resolved three zoning issues that had been ongoing for a while as well as taking on 8 new cases in late January and early February. He also shared that he is looking into leash laws, both what the state already has in place and what other communities similar to Morgantown have. This is due to an increase in complaints regarding free roaming dogs and cats in the city.

City Police Chief Giles Taylor reported response to 800 calls, 14 vehicle accidents and 12 arrests. He indicated that January and February are typically slow but that there does seem to be an uptick beginning. Chief Taylor then commended Jesse Burden. Chief Taylor explained that after joining the department three years ago, Officer Burden was assigned a case that recently reached closure as the man accused of sexual abuse was found guilty and sentenced to life without parole.

Next, City Administrator Jerrod Barks discussed the status of many grants the city has applied for. The processes to receive several of these grants are nearing completion. He also indicated that with the construction of the new City of Morgantown sign, the old sign, across from Butler County High School, will be refaced to indicate that Morgantown is a trail town.

In the Mayor’s report, Phelps shared that Morgantown City Park renovations may begin as soon as April 1 with a projected completion date of March of next year.

This concluded agency reports. There was no old business. In new business, Steven Throneberry of Throneberry CPAs and Kendall Embry, of Embry and Watts, CPAs, presented an overview of the 2020 Audit. Throneberry explained that the city received a clean audit report. Both Throneberry and Embry praised the city for responsible spending and efficient organization.

Also in new business, the mayor recommended Chris Sanders replace Bryan Locke in his position in Planning and Zoning and Michelle Phelps Tutko replace Sanders in on the Board of Adjustments. Councilman Givens made motions to approve each recommendation and Councilman Gaskey seconded the Sanders appointment with Councilwoman Dionne Merritt giving the second for the Tutko recommendation.

Finally, Mayor Phelps asked the Council to approve Resolution 2021-01. This resolution would ask the state highway department for a larger allocation for the year 2021. He indicated that the Kentucky League of Cities has encouraged Kentucky cities to create resolutions like this one. The timing is important as many legislative committees are meeting to discuss things like budgeting allocations.

At that point, the Council went into closed session per KRS 61.810 1c Discussions of proposed or pending litigation against or on behalf of the public agency.