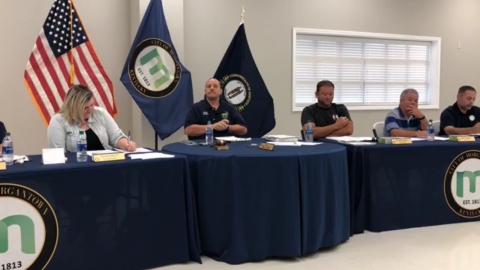 The council voted 4-2, with White and Gaskey voting nay, to approve the second reading of the restaurant tax ordinance. The three percent tax will take effect on January 1, 2020. According to Mayor Billy Phelps, ninety percent of the money collected will go toward the renovation of the Charles Black City Park. The restaurant tax is projected to generate $240,000 annually.

They also approved the establishment of a city tourism board, a Hotel/Motel Tax, and a one-percent transit room tax, and by the same 4-2 vote.

The council also approved the second reading of the property tax ordinance, in which rates were 11.1 Real Property and 12.67 tangible.

Mayor Phelps announced that the owner of the building on the corner, next door to the old Dime Store which has been torn down, claims extensive damage was done to her building.

"We have turned it over to the insurance," said Mayor Phelps.

Permits granted for a storage building on Dave Gaskey Lane and a dentist office on Logansport Road.

The Housing Authority did not meet due to lack of quorum.

Workers will start the Mooretown Loop gas project after crops are out of the fields. They purchased a leak detection device to identify water lines underground, which should help minimize street damage in the future. The commission has an ongoing evaluation of equipment and tools to determine purchase priorities in the future.

Several cases are closed, and there are 11 open cases now being worked. The examples include high grass, windows, exterior walls, junk lawn equipment, garbage, and couches in the yards.