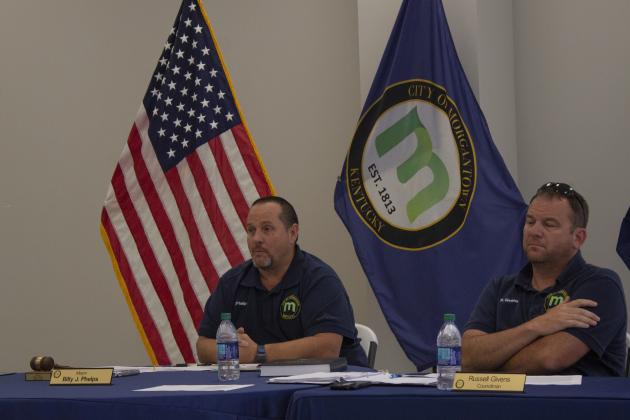 The Morgantown City Council meeting met on Thursday, June 13 at the Eva J. Hawes Building. All council members were in attendance.

Housing:  James Dossey stated that they did not have a meeting due to the lack of items on the agenda to be discussed and stated that their next meeting would be Monday, June 24. __ also added that they are waiting to receive a response from the construction site to continue work on the parking lot of the Boys & Girls Club.

Utilities: Jim Green discussed the highlights of the last Morgantown Utilities meeting. Items of importance included the commission electing to hire Hensley & Throneberry and Embry & Watts to perform the 2018-2019 audit. Green also discussed the results of their vote to increase Gas rates by three percent and water rates by six percent starting on July 1. Mayor Billy Phelps also pointed out their choice to re-elect the same CPA. Gaskey said they wanted to stay consistent.

MOGO Shuttle: For the first time, the city was given a report on the Mogo shuttle service that recently began in Morgantown. Dale Fazel, driver of the Mogo Shuttle, gave the report and discussed the shocking success that he has received so far. The report includes numbers from the week of May 7 to June 11. The results are:

Frazel said that the numbers were surprising as the busier days proved to be the opposite of what he had originally thought.

Mayor Phelps asked Fazel how big of a need exists for shuttle service?  Frazel said he believes that it is fulfilling a large need in the community. He discussed how he has gone to just about everywhere in the city to pick up passengers, including taking calls from people requesting pickups and drop offs to locations such as the pool and even their workplaces. Phelps then asked if he had received any feedback. Frazel stated that he has not gotten a single negative comment from anyone about the experience. He has received many “thank yous” from his passengers.

-5 face to face communications rather than letters

Maintenance: Harold Deweese stated that the pool is very close to being finished and a few minor touches are being made.

Police: 371 total dispatched calls for the month of May

Administration: All follow-up documentations have been sent in for the Tap Grant, which was recently awarded to the city. City Administrator Jerrod Barks said they are waiting for state approval to begin the project.

The city met with the architects at Morgantown City Hall last week and Mayor Phelps said construction is moving along smoothly. Electric and plumbing has been completed and concrete is being poured.

Phelps said the pool is almost complete and they are working hard to get the remainder of the project finished. Swimmers are not yet being charged until all work is finished.

“I didn’t think it was appropriate to charge them until everything is completed,” Phelps said.

Sidewalks on Dave Gaskey Lane are completed and have been inspected by an engineer.

Phelps said they are looking at beginning work on Saw Mill Road for the next fiscal year, which will start inJuly.

Mayor Phelps re-appointed Jim McDaniels to the Tourism Board.

The city recently asked Precision Concrete to inspect the sidewalks within a 15-block radius in Butler County. The company found 272 hazards. Of those hazards, 222 of those were found to be repairable. The cost came to $15,066 with an estimated cost savings of about $32,000. The city has money left in their budget and has decided to go ahead and complete sidewalk repairs before the starts of the new fiscal year.

Landfill Discussion: Mayor Phelps began the discussion by explaining that the city started a process over a month ago to create an ordinance in attempt to prevent the landfill. He said he wanted to put their regulations as tight as they could and was looking at an ordinance that would charge half a million dollars for a second landfill to be put in the city. However, due to the landfill plans already pre-existing, there is nothing that can be done to prevent the possibility of the current one at hand.

Phelps therefore suggested that the city build their ordinance around the county’s to prevent them from hindering their work and allow the city to be a part of the process.

Citizen Osei Thomas proposed an idea for joint zoning with the county and current planning and zoning to eliminate or lessen any future potential costs.

Phelps said that while he cannot guarantee any decisions made on behalf of the county, he would assist them in any way possible regardless of their decision to bring zoning into the county and will continue to work with them and help with the process.

Frank House was also present and spoke on a plan in the works with an attorney that he has recently met with. House said they are in the process of developing a plan and that he would be announcing it in the coming weeks as it becomes more developed.

House also said that his attorney commented on the fact that enacting an ordinance shows their determination to fight regardless of whether their actions will have a direct effect on the current situation. House encouraged all citizens to join together and support the county and city.

City Council Member Dionne Merritt spoke on how the issue hits close to home with her and her family.

“I don’t want my children to permanently leave the county because of this potential landfill,” Merritt said.

“Anything we can do to stop this is on the table,” said City Council Member Sterling White.

House reminded everyone that the city and fiscal court cannot be the only ones taking action and encouraged citizens to do their part.

Many citizens in attendance spoke on the importance of other members of the community needing to do their part to help fight this issue.