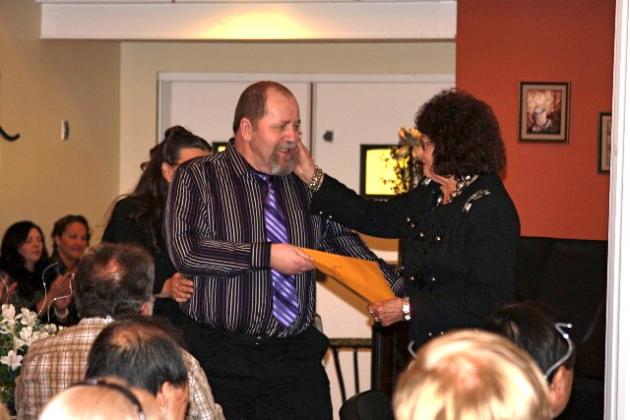 Morgantown Care and Rehabilitation held its Hall of Fame Banquet on Thursday, November 1.  Director of Volunteer Services, Shirley Allen welcomed a large crowd to the event.

"This is one of my favorite events of Signature Health Care, we can honor residents, stakeholders, and community leaders,"added Allen.

"It is an honor to have this facility in Butler County, and we want to thank you for being here," said Fields. People care about the patients from the staff, to the volunteers, and administrators."

Former State Representative Woody Allen presented each of the inductees into the Hall of Fame with a Kentucky Colonel certificate.  During the induction ceremony each inductee was recognized and Shirley Allen read a brief account of their life and achievements.  Inducted were Dr. Richard T.C. Wan, the late Patricia Dian Lacefield, Wanda Gaskey, the late Joseph Bunch, and Randy Felty.

"I have only been here since July but the "Spirit of Community" in the facility and county is amazing, thank you for your support of Morgantown Care & Rehab," said Midkiff.

A physician of auspicious proportions arrived in Butler County in 1966.  The area was never the same as this multi-talented and caring doctor lent his talents to the deserving people he encountered in his practice.

Born in Tokyo, Japan and educated at the National Defense Medical Center in Taipei, Formosa, he completed his Internship in Taipei and at St. John’s Hospital in New Brunswick, Canada. His residency was accomplished at Taipei and in 1963-1966 at the University of Louisville –in Pediatrics.

Thanks to an influential Congressman, Dr. Wan was persuaded to choose an assignment in the Butler County community.  He had been offered positions in many influential areas, but he moved with his wife and children to this needful locality and no one who knows him has ever regretted this earth-shattering choice.

When the doctor began, his office calls were five dollars; he made house calls (a trend unheard of now), delivered babies, did rounds at hospitals, and ministered to nursing homes.  Then (as now) he worked six days a week and was always on call for his patients every day at any hour.  The value of a true man of medicine can never be fully calculated.

Not only does Dr. Wan practice his craft, but he organizes special events for those who need assistance the most—like his Christmas party with gifts for the Head Start program or the many scholarships he has funded.  His charity includes animals as well; he has an Animal Sanctuary as a part of his home area and has saved countless deserted pets from extermination.

A specialty of the doctor is diagnosing various ailments when other educated people may miss them.  He does sutures, minor surgeries, emergencies, PFTs, holter monitors, EKGs, x-rays, lab work, EMGs, and anything the patients he loves so dearly need done.

The era of dedicated family physicians is dwindling—almost to a close.  Dr. Richard T.C. Wan is one of the last in this great adventure—a full-family practice that is always available to those in need.  Our country was founded on this colossal precept and we honor one of the pioneers in this dedicated occupation.

This dedicated member of the “Greatest Generation” did full credit to this era.  Joseph Bunch was born in 1920 and was a member of the Asiatic-Pacific—Philippines Liberation Team in the United States Navy.  As a Machinist Mate 2nd Class, he served his country from 1943 until 1945.  This period of his life culminated in his marriage to his school days sweetheart, Ella, upon his return.  This union produced three beautiful daughters.

“Brother Joe” (as he was affectionately termed) graduated from the Junior College at Campbellsville, Georgetown College (with a Bachelor’s Degree in Religion), and spent two years at Western Ky. University to qualify for a teaching certificate.  This well-educated and loving man eventually taught math and science for 29 years at Morgantown Elementary and the Green River Boy’s Camp.

As a bi-vocational pastor, he served as a Baptist minister from 1951 until 1989.  After retiring, he filled the pulpits of many churches for numerous years.  He normally only pastored small churches because he felt the Lord leading him in this direction.  Fame and glory were not Joe Bunch’s forte.

Honors were certainly not unknown to this compassionate man of God.  He was the DAR Veteran of the Year and in all received over fifteen plaques for his numerous achievements.  He was on the Camp Joy Board of Directors, belonged to the Retired Teachers Association, and was active in the Gasper River Association of Baptists.

Perhaps one of Bro. Joe’s greatest legacies was his service for over 30 years at Morgantown Care & Rehab.  From teaching Bible Study Classes to preaching insightful sermons—he could handle it all.  If someone cancelled a service, the working system was “call Bro. Joe”; he filled in so many times and was subsequently honored each year at the annual Volunteer Reception.  He was an active Christian who never stopped giving.

After being diagnosed with Alzheimer’s he retained the beautiful art of prayer.  Sadly, he passed away in 2012. The world lost a congenial gentleman who only aspired to be a faithful and devoted servant and never truly lost a connection with his beloved Maker.

Loving devotion toward all her fellow humans—and even to lowly plants and animals—was the code Patricia Dian Lacefield lived by.  She gave her best endeavor to her family, to her job (at MCRC for over 22 years), and to the Lord she worshipped.  No task was too difficult for this lady who was the epitome of patience and human endurance.

Pat battled various ailments much of her life.  Born Patricia Phelps on January 24, 1950, she passed away on February 24, 2012.  She was the wife of M.C. Lacefield and was the mother of one lovely daughter, Tonya.

Born during an era of ethical principles and rigid devotion to duty, Pat was a classic example of this time period.  She sang beautifully in her church choir (Barnett’s Lick Baptist Church) as a youth, graduated from Butler County High School, and even became a C.N.A. in 2007.

The majority of her work experience was situated in the Quality of Life department, where she was truly an embodiment of altruism.  Hugs for residents and uplifting words of encouragement were her daily regime. A day didn’t go by in our facility when Pat did not relate lovingly to numerous souls hungry for that compassionate touch.

Fun was a part of her life as well as she went camping, toured yard sales, watched movies, or created some wondrous food items in her busy kitchen. She and her four sisters even sang together in the melodious group known as the “Phelps Sisters”.  She was constantly in demand as a confidante and friend; she always had a ready ear for those with special needs.

Patricia Lacefield has gone to her eternal reward now, but those who remain continually reminisce about her beautiful smile, kind heart, and purposeful attention to detail on the job.  She had pledged to do her best and nothing less than perfection did she tolerate.  We revel in the classic charisma of the heights she attained as a splendiferous example of what God intended us all to be.

An American patriot was born on July 28, 1951.  Otis Randall Felty graduated from high school and entered into service in the United States Army in November of 1969.

This phase of Randy’s life yielded him three Sharp Shooter medals; he was a Sergeant E5 when discharged to the Army Reserve National Guard.  He had been honored for Distinguished Military Service and served in the Guard for a year.  Randy was a quiet hero who loved his country.

Trucking (even owning his own truck) was a major portion of his life’s vocation.  His beloved wife and daughter, listening to gospel music, car racing, fishing, and University of KY basketball helped influence and define the man he became.

Many other achievements were documented as Randy continued to contribute and share his numerous abilities with other people.  Not only was he a member of the Fifth District Fire Department Board of Directors, Banock Masonic Lodge #824, but was an entrepreneur in the finest sense as he and his wife, Brenda, opened and ran a successful restaurant.

The onset of declining health interrupted this man’s journey. Prevailing against vast obstacles has always guided his pilgrimage and what an experience it has been!  Fresh in the minds of the public was the incredible dedication he delivered to his country, the aid he rendered in procuring new fire trucks for his community, those famous fish dinners he and his wife prepared that were known countywide, ball games he coached so ably and the numerous young people he inspired—these were challenges he met head on and with a great deal of zeal and determination.

Randy Felty entered Morgantown Care & Rehab. in 2010 and considers this place his home now.  He still loves the Kentucky blue & white and relishes the many visits of his family and friends.  Still present are his relentless sense of humor and rugged good looks.  He is reminded by many  of his undaunted enthusiasm for life; he now accepts and surmounts whatever the day’s adventure holds and never ceases to be totally involved with the exacting intricacies of day-to-day challenges.

The essence of professionalism, compassion, and dedication are embodied in the person of Wanda Gaskey.  A faithful employee for over 33 years, she has attained the enviable status of C.N.A. and C.M.A.; she was further named the Servant Leader of the Year of the facility in 2006.

Serving our residents has always been of the utmost importance—as well as seeking professional educational experiences through numerous in-services and seminars.  Fulfilling family and residents’ expectations goes hand-in-hand with her being a major influence within the facility.

Wanda is married to Billy J. Gaskey and has been since 1984. Her abiding passions (outside of her loving and supportive family), includes showing vintage automobiles, horseback riding, fishing, hunting, and any activity in the great outdoors.  She is a member of Pleasant Union United Baptist Church in Brownsville, KY.  Living a principle centered life has always been a priority for her; she felt God led to be in her present vocation since she was 17-years old.

Concerned people are difficult to find and only rarely does one so committed to job and individual needs occur in the health care setting. Wanda is motivated by the needs of patients and knows how to make each one feel as special as they truly are.  The love she has for others is manifested in the care she delivers each day.

Becoming a part of health care life has always constituted a part of this loyal employee’s nature.  As an active member of the Revolutionary Committee within the facility, she has strived to accommodate better conditions and rewards for her fellow workers.  Wanda has labored conscientiously to sponsor special events and see that they are expedited properly.

Devotion to duty and a loving nature should always be rewarded and this special 50-year old has earned a place in the hearts and minds of residents, employees, and residents’ families.  Wanda Gaskey has truly displayed courage and selflessness through her nature and her commitment to her goal-centered life.