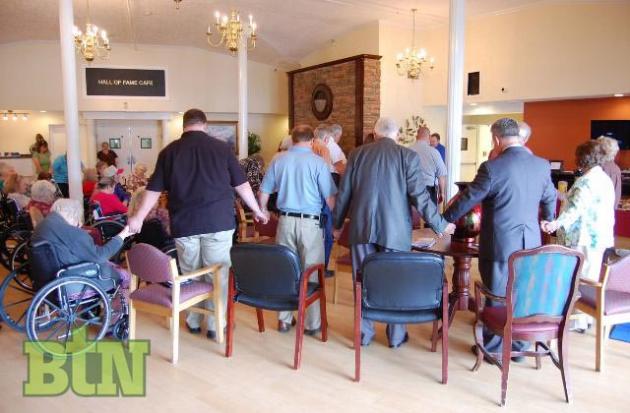 Morgantown Care and Rehab, a Signature HealthCare Community, celebrated National Day of Prayer on May 3rd by inviting local officials to join their staff and residents for a series of prayers. After the welcome and pledge, led by Bro. Jim McDaniel, and the National Anthem, sang by Tiffany Winchell, the prayers began. Prayers were led by Bro. Roger Taylor, Bro. Raymond Ward, Bro. Greg Wallace, Bro. David Hocker, Bro. Jim McDaniel, and Bro. David Roland.

"We're just so privileged to be able to do this," said Bro. McDaniel, chaplain at Morgantown Care and Rehab. "We really appreciate all of the local officials who were able to come out and take part this morning."

"We really appreciate Morgantown Care and Rehab sponsoring the National Day of Prayer because we believe that prayer is the answer to the ailments of our country," said Judge Fields.