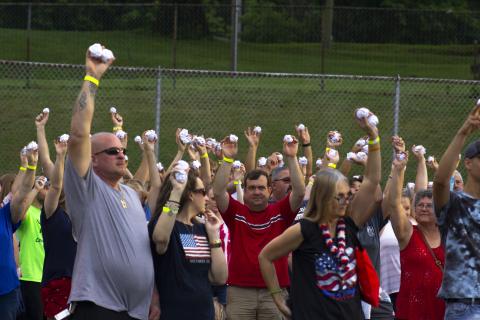 The City of Morgantown achieved a new Guinness World Record on Thursday, July 4 for the World’s Largest Paper Ball Fight.

Over 1,000 paper wads were thrown and over 600 citizens of Butler County and surrounding areas gathered to participate in the event. The attempt was held at the tennis court at the Charles Black City Park during the annual Green River Catfish Festival.

“We wanted to do something different this year,” said Mayor Billy Phelps. “We wanted to attempt a world record that everyone in the community could be a part of.”

According to Guinness World Record Official Phillip Robertson, the previous record was set in 2013 in Canada with 282 people.

Each participant was counted prior to the event and was given 2 paper wads to start with. According to Robertson, the rule was that all participants must continue to throw paper balls for one full minute to qualify. For fun, Mayor Billy Phelps insisted that the participants throw them for two minutes.

Robertson gave on official announcement at the main stage following the attempt and announced that there were 660 participants. Robertson shared that there were seven deductions, due to some younger participants in attendance not taking part for the full minute. This brought the total number of fully participating people to 653.

“You guys really put your spirit into it and you gave it a good go,” said Robertson. “It was good fun to watch.”

Robertson also said this makes it America’s first Guinness World Record title to be received on the fourth of July.

“The city of Morgantown has been put on the map. I am honored that on Independence Day in 2019, we can also remember today as the day we achieved a world record,” said Mayor Billy Phelps.