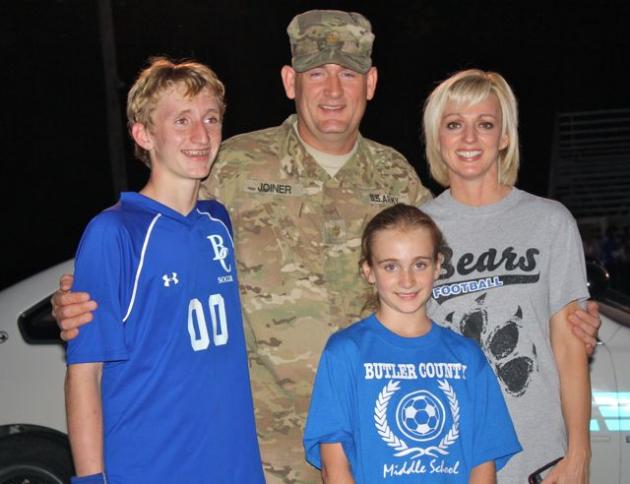 The Michael Hays Soccer Field in Morgantown was the site of a military family reunited once again as Major Allen Joiner surprised his children with an early return from deployment in Afghanistan. With an escort from the Morgantown City Police, Major Joiner was transported to the middle of the soccer field to meet son Cameron and daughter Adrianna.

Cameron, 13, is a 7th grader at BCMS and plays on the school’s new soccer team.  Adrianna, 9, is in the 4th grade at MES and runs cross-country.  Both children’s birthdays were in September but the family decided to wait until “Dad” returned before celebrating them, which they’ll do as a family on Sunday before leaving for a short family vacation.

Major Joiner has been in the U.S. military for 23 years, serving four years regular Army and the past 19 years in the National Guard.  He also works full time at the National Guard Armory in Greenville. This is his second deployment, having served for a year in Iraq in 2005-2006.

When he was gone on that deployment, his wife, Anita (Tyree), spoke at the District/Community Veterans’ Day program held each hear at Butler County High School.  Anita Joiner spoke passionately (and emotionally) about what it’s like to on the “Homefront” while your husband is deployed.

“She (Anita) did a remarkable job and is still one of the most talked about speakers,” said sister-in-law Linda Tyree, who also organizes the annual Veterans’ Day program.

For the last six months, Major Joiner has been working with the Kentucky Agri-Business Development Team in Afghanistan, which includes working with the Afghan government on developing successful farming and marketing skills.

“Allen is certainly doing a noble work in Afghanistan and we are very proud of him,” said brother-in-law Ronnie Tyree.  “A wise man once said, ‘Give a man a fish and you feed him for a day, but teach a man how to fish and you feed him for a lifetime.’  Major Joiner is doing just that by advising the Afghans how to better utilize their resources and by befriending enemies.  What could be more noble than that?  Americans have always embraced the idea of giving a hand-up instead of a hand-out,” added Tyree.

Although Thursday’s homecoming was special, it will be relatively brief.  Major Joiner will be on a two-week leave before returning to finish his tour until, which runs until January, 2012.