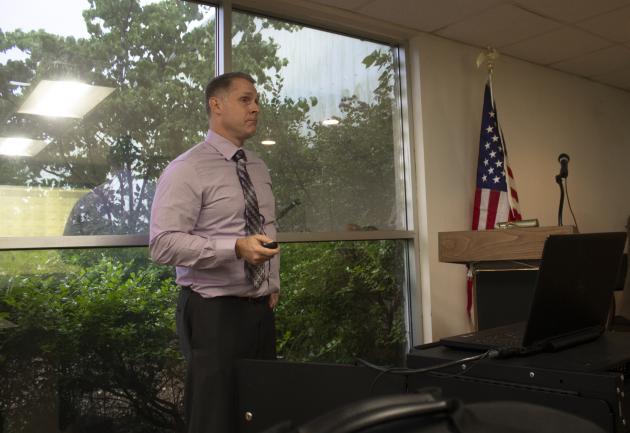 The superintendent’s report included discussion on the Lunchbox Express, which Superintendent Scott Howard said was a positive thing for the community. Howard was able to ride along with the staff to experience it and said that he was pleased with the program.

“That just tells me that kids are hungry when they’re willing to come outside in 90 something degrees and get lunch,” Howard said. “I really hope that is something that the district can continue to do.”

Superintendent Howard met with the Ross Sinclair Financial Agency and said that he would like to stay with Hilliard Lyons as they have maintained a good working relationship with the current company. Howard discussed that in his two-year term with Judge-Executive Tim Flener on the Workforce Development Cabinet, they are in the process of trying to develop an initiative to spend some of the money that the county has received for economic development purposes. They will have received a total of about $150,000 to start with and are currently brainstorming ideas. He said they discussed possibilities of things such as purchasing property or developing an amphitheatre and venue at the river.

Howard said that although this topic may not be directly related to the school district, he wants to keep the school board updated on this process because along with economic development, comes the consideration of education for many people who may come to the area.

The school board visited the Green County School District in regard to their interest in obtaining metal detectors for Butler County schools. Howard said the Green County district is similar in size to Butler County. Howard was told that given the districts current procedures, metal detectors may make the process quicker and more efficient. Howard said they would need at least around four for the high school and a few for the middle school.

Board member Amy Sanders voiced her concern for the other possible entrances into the school that students may use. Those in attendance also discussed this matter stating that the options would be to make all students walk around to the front entrance only, or to use the detectors at multiple entrances of the schools. The machines will blink indicating where an object is located on a student or in the bag if one is found. Students will be able to then quickly pass through. The machines will be small and low maintenance and board members said that it would be more reliable than their current methods of bag checking at the schools.

“We talked a lot about giving parents and community members a piece of mind that our schools are trying to do something to keep their kids safe,” Hood said.

The topic will be added to the August agenda as an item of action.

Chad Tyree spoke at the meeting to propose the amendment of the current school policy that prohibits the distribution of religious materials in schools. The new policy, as Tyree states “would give school administration the discretion to allow the dissemination of certain text to students.” Tyree provided a typed and complete copy of the new policy in which he was discussing. The policy could be changed or reversed at any time and would allow students the opportunity to take the provided materials that would be available at the schools one day a year. No representatives would be allowed to be present during the time that the text is provided and no staff would be allowed to encourage or discourage students from taking the provided materials. A specific table with a designated location by the principal would be assigned and specific signage would be allowed on the table.

“This policy is an item that could be used to provide more tools to young people…tools that can be used productively by the next generation,” Tyree said.

Howard and the school board thanked Tyree for his time and detailed proposal and promised to keep him updated on their decision. Howard said their options include leaving the policy as is to not allow any distribution of materials, to amend the board policy or to leave the decision up to the school-based decision-making council. Howard said he does not recommend putting the decision in the hands of the council due to him wanting to remain consistent across the district. If amended, the board would set the specific day and all guidelines would be followed regarding the policy procedures. No action was taken at this time and will be added to the August agenda.

The Morgantown Back to School Bash will take place on July 30 from 5 to 7 p.m. at the Charles Black City Park.

The 2019 Fiscal Year Superintendent Annual Attendance Report (SAAR) was given by Assistant Superintendent Robert Tuck. Attendance percentages have gone up as the report shows an overall average daily attendance number of 1968.49 in the last five years. Compared to those of previous years, there is a 33-student difference and a financial increase of $135,120, which Tuck said is significant. He said Butler County also appears to be within the higher averages when compared to other school districts. "Chronic Absenteeism" was also discussed. This is a term that went into effect in 2016 and regards the numbers of absences by students who repeatedly miss school regardless of whether they have an excuse. Tuck said this has been a tough factor to manage, however the schools were able to bring this number down as well. According to Tuck, given the numbers, the next five years are looking to show positive growth in enrollment and attendance.

“The school district is trending in the right direction,” Tuck said.

The district will be receiving three new buses to be delivered this week for the upcoming school year, including one new special-needs bus.

A discussion took place on the need for a new part-time assistant principal position at North Butler Elementary School. Butler Elementary Principal Josh Belcher said it would be of great help to him to have another person assisting with duties and would allow him to get more things done and spend more time in the classrooms. The item was later approved.

The second and final reading of the Fiscal Year 2020 KSBA Recommended Policies and Procedures Updates was approved. Howard discussed that the reading would now include the updating of the school board meeting room which will include some minor changes such as new window tinting and painting and additions to give the room a more professional look.

Other items that were approved include: