MES Presents "Music All Over Me" 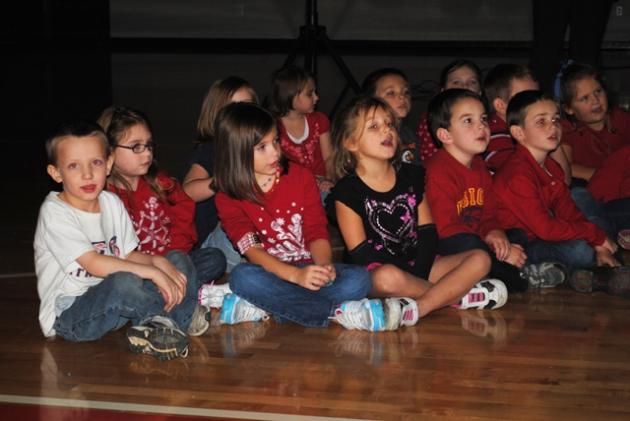 Morgantown Elementary School gymnasium was packed with hundreds of proud parents, grandparents, aunt, uncles, and other family and friends Thursday night as the five kindergarten classes performed the musical “Music All Over Me.”  After months of practice, the kindergarten students put on a show that did not disappoint.  All of the children sang, and 22 of the students had speaking parts that kept the crowd laughing throughout the musical.

The musical was under the direction of Bryant L. McClellan, teacher at Morgantown Elementary.  McClellan said, “I was extremely pleased with the performance by all of the kids! The turnout by family, friends, and the community was awesome! There were more people in attendance than any elementary music performance at M.E.S. Over 700! Wow! Thank you so much for supporting your children first of all, and supporting the Arts and Humanities Program of Butler County Schools!”

McClellan said he loves working with all students; however, kindergarten is always special to him.  He shared, “This year is certainly special as I have my own child in the class! I understand much more from the parent’s perspective!”

McClellan said he couldn’t say thank you enough to the people who made this program possible. He said the program would not have been possible if it had not been for the help of all of the kindergarten teachers, teachers’ aids, Mrs. Grubb and Tammy Young for use of the gym and help with the program, and Ms. Lewis-Lenzo for helping with the students.  He said, “Thanks to Mr. Ausbrooks for changing his schedule around so I could have more time with the kindergarten students, but most of all the parents of this wonderful group of children.”