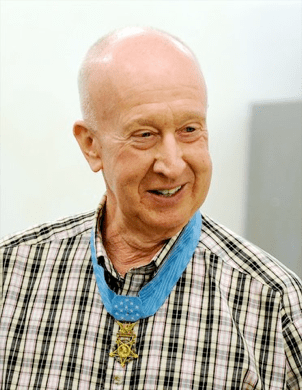 Butler County is home to one of two Medal of Honor recipents in Kentucky, Don Jenkins. The Medal of Honor is the highest miltary decoration presented by the United States Government to its members of the armed forces.  He received the Medal of Honor in 1971 from former President Richard Nixon.  There is a total of 69 receipents still living with the oldest being 99 and the youngest 31 years of age. Three recepients are still serving.

Jenkins joined the United States Army, and by January 6, 1969 was serving as a private first class in Alpha Company, 2d Battalion, 39th Infantry Regiment, 9th Infantry Division. During a firefight on that day, in Kien Phong Province, Republic of Vietnam, Jenkins repeatedly exposed himself to hostile fire to engage the enemy, resupply his ammunition, and obtain new weapons. Despite being wounded himself, he made several trips through intense fire to rescue other wounded soldiers. For his actions during the battle Jenkins was promoted to staff sergeant and awarded the Medal of Honor in March.

For conspicuous gallantry and intrepidity in action at the risk of his life above and beyond the call of duty. Staff Sergeant Jenkins (then Private First Class.), Alpha Company, distinguished himself while serving as a machine gunner on a reconnaissance mission. When his company came under heavy crossfire from an enemy complex, Staff Sergeant Jenkins unhesitatingly maneuvered forward to a perilously exposed position and began placing suppressive fire on the enemy. When his own machine gun jammed, he immediately obtained a rifle and continued to fire into the enemy bunkers until his machine gun was made operative by his assistant. He exposed himself to extremely heavy fire when he repeatedly both ran and crawled across open terrain to obtain resupplies of ammunition until he had exhausted all that was available for his machine gun. Displaying tremendous presence of mind, he then armed himself with 2 antitank weapons and, by himself, maneuvered through the hostile fusillade to within 20 meters of an enemy bunker to destroy that position. After moving back to the friendly defensive perimeter long enough to secure yet another weapon, a grenade launcher, Staff Sergeant Jenkins moved forward to a position providing no protection and resumed placing accurate fire on the enemy until his ammunition was again exhausted. During this time he was seriously wounded by shrapnel. Undaunted and displaying great courage, he moved forward 100 meters to aid a friendly element that was pinned down only a few meters from the enemy. This he did with complete disregard for his own wound and despite having been advised that several previous rescue attempts had failed at the cost of the life of 1 and the wounding of others. Ignoring the continuing intense fire and his painful wounds, and hindered by darkness, he made 3 trips to the beleaguered unit, each time pulling a wounded comrade back to safety. Staff Sergeant Jenkins' extraordinary valor, dedication, and indomitable spirit inspired his fellow soldiers to repulse the determined enemy attack and ultimately to defeat the larger force. Staff Sergeant Jenkins risk of his life reflect great credit upon himself, his unit, and the U.S. Army.[1]