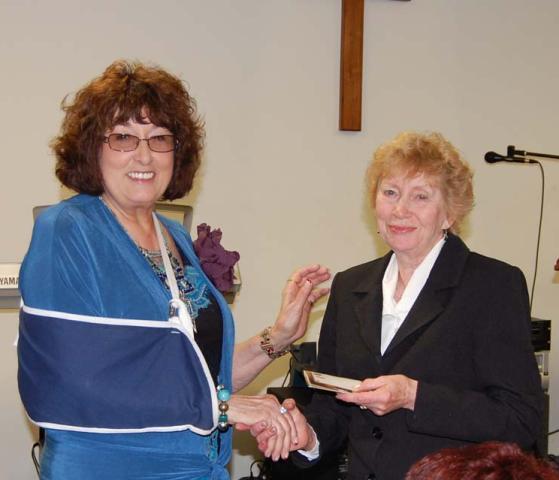 Shirley Allen, Director of Volunteer Services at Morgantown Care and Rehab, loves her volunteers. So does the company, as shown Thursday night at an appreciation dinner held at the Gasper River Baptist Association building. A total of 97 signed the register.

“I hope that you know and realize that you are members of an elite group. The elite group is the corps of volunteers that we have at Morgantown Care and Rehab,” said Allen in her opening remarks.

Allen’s sentiments were echoed by Tiffany Clark, administrator, who announced,” We had corporate in our building today and I want you to know that we have 75 buildings right now in  Signature that cover 7 states and everybody in this room is a “best practice” for our whole company, so our company is going to mimic your program. That’s a hand to you all for the hours you put in.”

Following the dinner, a total of 41 President’s Volunteer Service Awards were presented to individuals and groups based on hours of service recorded. Each recipient received a letter of commendation from the President as well.

Volunteer of the year went to Iris Moore. “She is dedicated and present at the facility several times a week and her services are invaluable,” Allen noted.

A new award, the “Pat Lacefield Above and Beyond the Call of Duty,” award went to Eddie Neighbors. The award is named for Pat Lacefield, a highly respected 22 year employee. She died of cancer earlier this year. Among the reasons given for selecting Neighbors is his presence, three times weekly, as door monitor and his, “congenial nature which has made him a favorite with staff, visitors and other volunteers. Everyone knows good old Eddie,” said Allen in written remarks.