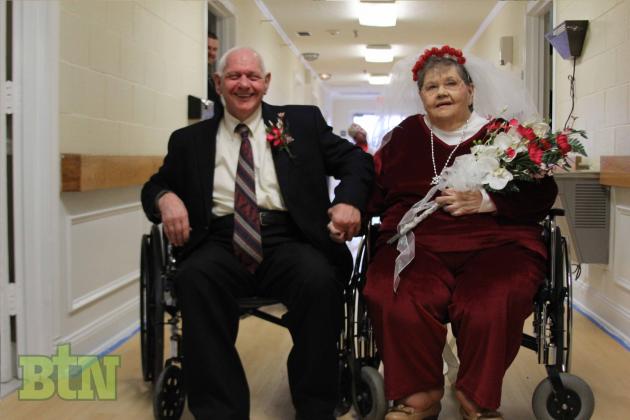 On Tuesday, February 14th a wedding ceremony took place at Morgantown Care and Rehab between two residents. Harvey Willis (H.W.) McKinney, 79 from Morgantown, and Mary Lou Abbott, 80 also from Morgantown were set to move down the aisle and be married with the ceremony beginning at 2PM. Both McKinney and Abbott are native to Butler County.  McKinney was a bachelor and Mary Lou had been a widow for 27 years. The two residents claim it was "Love at first sight" when they first met 6 years ago and both became residents of Morgantown Care and Rehab.

The wedding party also consisted of the Maid of Honor (Alyison Porter) the Best Man (Brad McKinney) and a Flower Girl (Emma Winchel). Performing the wedding ceremony was Brother Jim McDaniel, who is also the chaplain at Morgantown Care and Rehab.

The ceremony began with a prayer and musical performance by Tiffany Winchel. The flower girl walked the aisle and tossed petals onto the floor. The bride was then wheeled down the aisle to meet the groom. Following the vows and exchanging of rings, a reception was held in the cafe where the wedding cake was served along with food and drinks for the attendees.

Future plans for the newlyweds don't include a honeymoon on the beach, but the two will share a room with one another from this point forward. Also, for their honeymoon they will be hanging a "Do Not Disturb" sign on their door.

Check back for video of wedding.