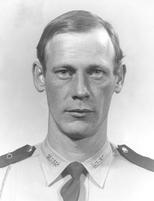 On June 30, 1982, Harry Lee Shelor Jr. began serving a 50 year sentence in the Kentucky Department of Corrections for the murder of  KSP Detective Darrell "Vendl"  Phelps on August 7, 1981. After serving nearly 31 years, Shelor, now 70 years of age, was released on February 13, 2013. The type of discharge was listed as minimum expiration. According to the Kentucky State Police memorial page, Phelps was investigating illegal cultivation of marijuana in Edmonson County. He was assigned to Post 3 Bowling Green and was an 11-year veteran of the Kentucky State Police. He was survived by his wife, Gale Givens Phelps and 2 children, Tammy Phelps Dotson and Darren G. Phelps. He is buried at Union Cemetery in Quality, Ky., in Butler County. In honor of his service and sacrifice, an eight-mile stretch of KY 1153 in Butler County has been designated the Det. Darrell V. Phelps Memorial Highway. Phelps began with the KSP in 1969 and became a detective in November of 1980. He served the counties of Ohio, Butler, and Logan.

The funeral hosted a procession of 172 vehicles, 93 of which were of law enforcement. Officers from the states of Tennessee, Indiana, Illinois, and Kentucky were present along with former Lt. Governor Martha Lane Collins.  The Phelps family was not aware of Shelor's release but they did attend a victim impact hearing in June of 1989 opposing Shelor's release at that time . The family was told that the next victim impact hearing would be held in 2017.