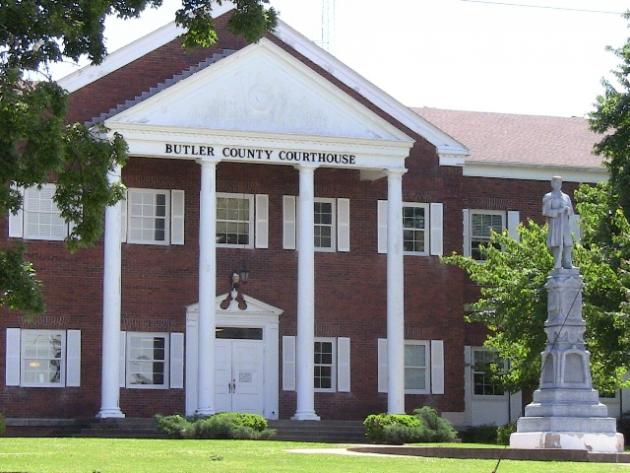 The Butler County Fiscal Court met in a lengthy meeting on Monday night for the regular November session.

Kim Cunningham spoke to the court concerning the condition of some grave sites at the Lee Cemetery on 100 Cane Ridge Road in the second magisterial district. Cunningham said that two crypts dating back to 1856 have been damaged because of the slippage of ground toward a ditch allegedly on the county right of way. Mrs. Cunningham reported that one crypt had shifted toward the cemetery, but the other is shifting over the rim of the ditch and downward toward Cane Ridge Road. The court was asked about the possibility of installing a retaining road along the edge of the cemetery to stop the slippage and/or the possible exhumation and relocation of the remains.

The graves belong to John C. Lee, born November 17, 1850 and died June 16, 1856, and Benjamin P. Lee, born March 12, 1853 and died June 15, 1856. The boys were the children of Edmund P. and Macdalene O. Lee, and died of Scarlet Fever. Cunningham told the court that the only living relative of the boys that she could find was Sydney Hatcher Chapman. According to Chapman the boys were interred beneath the crypts, and buried in shallow graves.

No action was taken on the issue, but Third District Magistrate--an engineer by profession, and County Road Supervisor Timmy West will examine the site, and determine if the affected areas are indeed on the county right of way. County Attorney Dick Deye has been tasked with investigating the legal issues involved with any county action to alleviate the problem. Judge David Fields asked that a report be given at the Fiscal Court meeting in December.

The court voted 5-0 to support the list of resolutions sent to them from the Butler County Farm Bureau Federation. The Federation held its annual meeting in September and adopted the resolutions then. Resolutions for the county included: the preservation of the Rochester Dam at current water levels, strong support for two agriculture teachers at Butler County High School, countywide high-speed internet access, and the maintenance of rural roads and right of ways throughout the county. Judge Fields reported that he had attended meetings in recent weeks concerning the Rochester Dam, and that the problem of countywide high speed internet access had been something the court had dealt with for some time. He also reported that maintenance of right of ways and rural roads in the county is among the court’s chief concerns. As for having two agriculture teachers at the high school Fields pointed out that issue is something to be taken up by the Board of Education. However, Fields did say that agriculture education is of vital concern for the county.

The Court next approved a payment of $470.00 to Ford Communications for repairs to the Fifth District Fire Department antenna tower. The total cost of the repairs were 1,670.00, but the Fifth District F.D. traded in 6 used TK 760 radios and received $1,200.00 credit. The measure passed 5-0 without discussion.

An ordinance imposing a 3% transient room (hotel/motel) tax rate received its first reading at the meeting. The transient room tax has been on the books since 1998 when the Tourism Commission was formed, but no record of the county’s half of the city/county ordinance could be found, causing the need for the ordinance to be reintroduced. Magistrate Johnny Tuck twice asked Judge Fields for confirmation that the tax is already being levied and collected, and then stressed that this is not a new tax or a tax increase. The first reading passed the court by a 5-0 vote. The second reading of the ordinance will be at the December Fiscal Court meeting on December 12, 2011. The tax is used to fund the local Tourism Commission.

The contract for garbage collection for the county--including the courthouse, jail, animal shelter, and ambulance service--was awarded to B&J Sanitation at a rate of $196.50 per month to provide an 8-yard waste container and empty it twice per week. When discussion opened on the issue Magistrate Keith Daugherty quickly moved to award the contract to Green River Waste at a rate of $241.00 per month. When Daugherty’s motion died for lack of second First District squire Stevie Givens moved to award the contract to B&J Sanitation with Chad Tyree seconding. After a voice vote indicated opposition to the motion Judge Fields called for a roll call vote on the measure. Magistrates Givens, Tuck, and Tyree voted yes on the issue, with magistrates Whittinghill and Daugherty casting nay votes. The contract passed by a vote of 3 to 2.

Sheriff Scottie Ward presented his third quarter report to the court and it was approved by a 5-0 vote. Ward then asked to address the court concerning his department’s purchase of a 2012 Dodge Ram Crew Cab pickup truck. Ward explained that he has 6 deputies and has only bought 3 new cruisers since taking office in January. One of the older cruisers has over 200,000 miles on it and is no longer reliable according to the sheriff. The truck was bought on the state bid and cost only $29,306, well below the list price of $37,900. Ward told the court that he was only reporting the purchase because he said he knew that magistrates would be asked where the money came from. The sheriff stressed that he needed no money for the project, and simply wanted to explain things up front so that magistrates would have answers if they were questioned about the truck.

The court retired into a closed session for almost an hour to discuss the clarification of the pay rate for county road crew employees. When the court returned to open session David Whittinghill moved to set the pay rate for all full-time road crew employees at $12.09 for everyone except the Road Supervisor. The measure passed 4-1 with the dissenting vote coming from Johnny Tuck. Tuck cast another no vote moments later when the court was asked to vote on a motion made by magistrate David Whittinghill to raise Solid Waste Coordinator Mark Sorrels’ pay rate to $11.00 per hour. The measure passed 4-1.

A telephone stipend for County Road Supervisor Timmy West was passed by a 5-0 vote. Because the County Road Supervisor is in effect on call 24/7/365 a phone has been provided for the position. West had asked the court to allow him a monthly stipend to underwrite the cost of him having a cell phone instead of providing him a phone. West said he would like to carry only one phone and needed to be able to text message and use other phone features that aren’t included on the county phone package. Judge’s secretary Kim Phelps reported that after speaking with state auditors they didn’t see a problem providing a stipend to West in the amount paid by the county monthly for the phone. Auditors did suggest that the amount paid to West be rounded off to $45.00 per month instead of the actual amount of $44.75 to aid with bookkeeping and tax records. Magistrate Keith Daugherty asked Judge Fields who would be responsible for replacing West’s phone in the event it was damaged or destroyed on the job. Fields answered that West had agreed to replace any damaged phones himself. Without further discussion the court approved the stipend 5-0.

In other business magistrates approved changing the name of Zions Harmony Cemetery Road to Zion Harmony Cemetery Road, approved the county road list, accepted a contract with Community Action of Southern Kentucky to continue to provide space for the Senior Center, accepted a resolution from the Kentucky Transportation Cabinet concerning the Rural Secondary Road List, and adopted the state’s holiday list for Fiscal Year 2011-12, including the December 12th holiday for the Gubernatorial Inaugural.

Submitted by Michaelle Johnson (not verified) on Wed, 11/16/2011 - 9:25pm
It is sad that the fiscal court did not give their business to Green River Waste locally owned by a Butler Co family but instead gave it to a business out of county!!! It looks like we should support local Butler Co families trying to start up their business in Butler Co.
Submitted by Sharon Hudnall (not verified) on Thu, 11/17/2011 - 10:06am
this is true , who is this helping (NOT BUTLER CO)