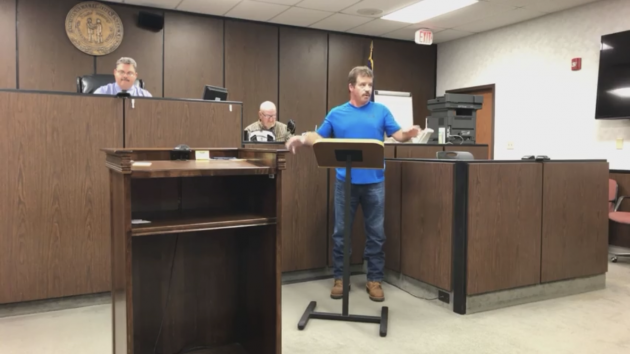 Concerned citizen Samuel Palmer addressed the court about the increased number of cell phone towers in the county.

"We are living in a microwave," said Palmer.

The county has no ordinances which address the issue. According to Palmer, the state guidelines require that towers be at least 500 feet from a residence.

"I would like to ask the court to extend that to 1,000 feet from a residence,” said Palmer.

The court thanked him for his comments.  According to Judge-Executive Tim Flener, there are several cell phone towers in the county.

The court split 3-2 on David Whittinghill's motion to donate $20,000 to the Butler County Conservation Club to build a trap building. Stevie Givens, Bryant, and Whittinghill voted yes, while Phelps and Timmy Givens voted no. The local 4-H and FFA shooting programs use the facility, however, the county does not own the property.

In other business, Timmy Givens made a motion to approve any licensed electrical inspector to work in Butler County.  Currently, only one inspector, Mike Barks, is allowed to inspect in the county. The motion died due to lack of a second.

The court voted 4-1 to go into closed session pursuant to KRS 61.810(1)(b) with Timmy Givens being the lone nay vote. After returning from closed session, Judge Flener stated that no action would be taken concerning the Morgantown Mall Building. The court has received two bids.

The Court had two bids for flooring for the Judge's office and the AOC room. Williams Flooring $5,084.47 and Jimmy Cooper $4,080.92, and approved Jimmy Cooper's bid.

The court approved the following by a 5-0 vote:

-Issue a check for $1,235 from General Fund to Butler County LEPC to correct a payment

-Advertise for a part-time position at the Butler County Animal Shelter less than 100 hours and start pay will be $9.60

-Purchase and pay for the title transfer for a vehicle for the Animal Shelter not to exceed $8,315

-Hire Susan Meredith as part-time kennel attendant as soon as her retirement clears for less than 100 hours at $9.60 per hour

-Purchase and install 16 new doors at the cost of $9,395.80 for the Animal Shelter from donations