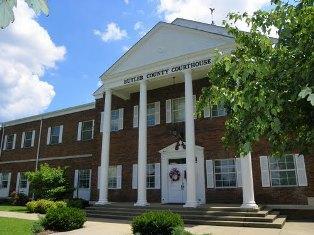 Butler County Fiscal Court met on Monday, July 12, at the Butler County Courthouse. First District Magistrate Stevie Givens was absent due to being in Washington, D.C. with the Kentucky Association of Counties.

The meeting began with Fifth District Magistrate Dillon Bryant suggesting two corrections (items 13 and 19) to the minutes from the previous meeting. Item 13 dealt with the motion to pay Jailer Ricky Romans' travel expenses to the State Jailer's Conference. According to Mr. Bryant, a motion was approved to pay Romans but was not included in the minutes. Romans, however, later declined to accept the reimbursement due to the request being less than 50 miles from Butler County.

Item 19 was concerning the number of hours for the part-time position for the road department.

An initial motion to approve the minutes was withdrawn and later amended to approve without the items in question.  Judge-Executive Tim Flener said they would research both items regarding the minutes from the previous meeting.

Butler County Clerk Sherry Johnson presented her quarterly reports. For the second quarter, the clerk's office took in $1,098,062.86, much higher than the $900,000 from last year.

According to Johnson, the state implemented an upgrade to the computer system over the July 4 holiday, which caused significant problems. As a result, clerks' offices across the state were unable to transfer or license vehicles.

Jailer Ricky Romans asked the Class D Coordinator Tara McMillin explain to the court new funding opportunities for the jail. House Bill 556 went into effect on July 1, allowing the jail to be reimbursed for every state prisoner who completes classes at the jail.

Currently, the jail offers MRT (moral recognition therapy), parenting, anger management, and GED classes. McMillin stated that, on average, 40 completion certificates are sent to the Department of Corrections per year. The jail will receive $2 per class and $1,000 for completion, while GED is $10 per class and $600 for completion. McMillian estimates the classes will bring in about $40,000 per year.

The court agreed to pay Roger Tanner $500 for fill while working on the Caney Fork Road.

The Court approved the following items:

--Contract with Gordian Contracting for repairs on the courthouse $33,512.12

--Advertise for part-time Road and Ferry operator for three months

--Advertise the audit instead of full settlement