Local Food For a Sustainable Future 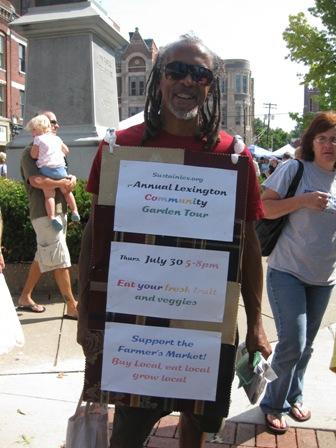 Kentucky’s present method of producing and distributing food based on global products and lots of fossil fuel use is unsustainable. The globalized food system which is at the heart of almost every problem facing the food system exacts a heavy price from all Kentuckians. Food from the global system is not only subject to more chemical applications, it is transported farther, processed more, contains more additives, and sits in trucks and on supermarket shelves longer—all of which compromise its taste, nutritional value, and safety.

Understanding that the problems facing Kentucky’s food system have common roots in the globalization of the economy helps point the way to a powerful systemic solution: re-quilting our local food system. Right now we are supporting the global food system at the expense of the local in pursuit of cheap prices. But the global food isn’t really cheap: it is heavily underwritten by hidden subsidies and ignores social and environmental costs, ultimately paid for by the same consumers who ostensibly benefit from lower prices. A shift toward local food means more than encouraging everyone to buy food that was grown within some prescribed distance. It is a broader, deeper change that involves placing a higher emphasis on diverse modes of food production that reflect the planet’s cultural, geographic, and climatic diversity.

Shifting toward a local food system is a strategic solution-multiplier with significant potential to improve many of the social, economic, and environmental problems we face. To make the shift, a powerful movement is therefore needed that can resist and reverse the globalization of the food economy while simultaneously promoting more localized food systems. Although thousands of people are already involved, it will take a great many more to create the “critical mass” needed to reorient government policy that transforms Kentucky’s food system. There is every reason to believe that Kentucky can become home to more socially just and economically viable food system that is healthier for people and the planet.

The 5th annual Bluegrass Local Food Summit held at the Crestwood Christian Church March 22-24 serves as a place to celebrate food and develop common understandings about the links between food, health, the environment, and local economies.  The Summit will convene farmers, government and business leadership, educators, chefs,  faith members, youth  and all concerned citizens to promote the health and well-being of children, families, farms, local economies and the environment by increasing access to locally grown and processed food in schools, hospitals, restaurants, institutions, groceries, food pantries and by supporting food and garden-based education in Kentucky.

The Summit begins on March 22 with a focus on the role of local government in leading this shift toward localization. Berea Mayor Connelly will speak about their Local Food System Strategic Plan and Transition Town efforts. Louisville Mayor Fischer will share his vision of the local food system being an engine for economic recovery. National speakers include food policy council expert, Mark Winne, Tammy Zborel with the National League of Cities and Mary Dale Debor, who has worked to bring local healthy food to hospitals and universities in six New England states. Local speakers will include Lenny Stolz of the Bluegrass AD District and Hopkins County jailer, Joe Blue. This first day will conclude with a book signing and dinner with Mark Winne, author of Food Rebels and Closing the Food Gap, 6-8pm at the Good Foods Market and Café.

The programs on Saturday March 24 will include a School Garden Workshop and Sustainable Living Workshops that include: keeping bees, chickens and goats, composting, healthy cooking, and making rain barrels. The Summit will conclude with a free film screening of Farmageddon at the Central Public Library Theater March 27 6-9pm.