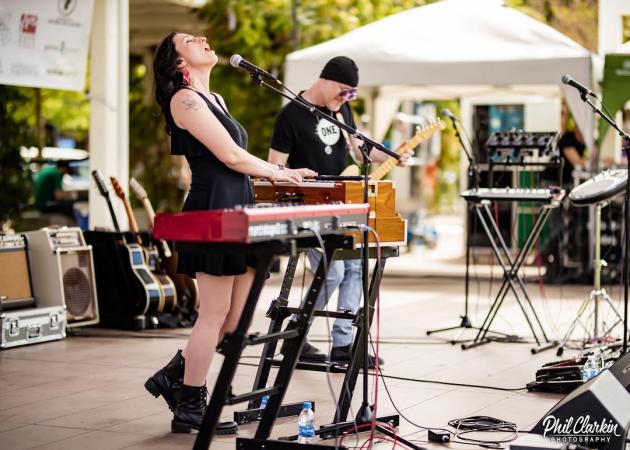 When I asked Jemal Hines (Wade to his family and friends) and Moksha Sommer of HuDost to categorize their music, they looked at each other and laughed.  Wade grinned and said, “We’re all over the map.  I guess you could call us Neo-Folk, Retro-Pop, Art Rock, World Fusion.”  When you consider the two have toured both North America and Europe, and that Moksha, originally from Canada, has studied with singers from Turkey and India, as well as belonging to a Bulgarian and Balkan women’s singing group in Montreal, it’s an understandable description of their eclectic sound.

Wade and Moksha have been together twenty years now, meeting for the first time at a Rumi festival in North Carolina.  Wade was living in Florida at the time, and the two connected again when Moksha travelled to Sarasota for a festival in the area.  It was in Florida that the they began writing and singing together.  Moksha returned to Montreal for school, and Wade obtained a student visa in order to study at a recording school in the same area.  In 2006, Moksha finished her undergrad degree (later earning her Master of Fine Arts degree) and the two took off for Europe.  A few years later, while living in New York, Moksha became pregnant.  She and Wade agreed it would be wise to live near family for the birth of their first child, Kaleb, so they moved to Montreal to be close to Moksha’s mother.  They moved to Butler County shortly before Kaleb’s first birthday (he recently finished first grade).  Wade has family in the county, and the couple had an opportunity to escape the turnstile of always renting in lieu of becoming homeowners.  It was a decision they are glad they made.  They love living in Butler County.  “It is a sanctuary,” Moksha says.

The couple’s latest album, “of Water + Mercy” rose to the number 24 spot on Billboard’s Americana/Folk chart.  The single, “Rise Together” (a collaboration with singer-songwriter, Dan Haseltine of Jars of Clay) was nominated for best Social Action song by the Independent Music Association.  The nomination turned into a win for HuDost.  It was a pleasant surprise for the couple, and a validation of the time and thought that goes into their music.  In an online post, Moksha expressed gratitude to the judges.  “Thank you for acknowledging our music and the power of artist advocacy,” she said.

Advocacy is a huge part of the music of HuDost.  It springs from the couple’s ability to see beyond themselves.  Moksha credits her parents, both professors, for encouraging her to consider ideas and views outside her own.  Her mother taught dance and later visual arts; her father, who taught English literature, was also part of an environmental conservation committee.  She said she learned early on, “there is a lot more beyond our own lives.”  In addition to their music, Wade and Moksha are involved with the ONE campaign, a movement that seeks to send government aid to the world’s poorest of the poor.  The couple are congressional leaders for the Butler County district, which means they meet with congressmen and senators from our district in order to inform and guide how foreign aid dollars will be spent.

It is currently spring, which, in a normal year, would mean HuDost would already be touring.  But, because of the Covid-19 virus, this year is anything but normal.  All spring event dates and many of the summer dates have been cancelled.  Europe and Africa are on the tour schedule for summer and fall, but it remains to be seen if those events will happen.  It has been a difficult time for the couple, whose livelihood depends on festivals, outdoor concerts and art center performances.  They have other musical avenues that keep them engaged, however. Both members play multiple instruments and have unique vocal styles, which puts them in a position to do studio work for other groups and individuals in the music world.  Having a music studio in their home also expands opportunities for the duo.  They have recently started writing music for children’s TV, and a project that has been in the works for some time is about to come to fruition, although not in its original format.  Thanks to a grant from the Endowment for the Arts, HuDost teamed up with a dance choreographer and visual artist to work on a piece that was originally slated for a live performance at Oz Arts in Nashville, but because of social distancing guidelines, the piece will be presented through a video recording, with each member of the project pre-recording their individual parts.  “This Holding: Traces of Contact” will premier May 29 at 8 PM. (For more information follow this link: https://www.ozartsnashville.org/this-holding/. )

HuDost.  What exactly does that mean?  It is a Turkish term made up of two words, the couple explains.  Hu is the word for the shared breath of all creation, the breath of the divine.  Dost means true friend of that breath.  The music this duo creates is touched by the divine, but it is also grounded in understanding and compassion and a desire to include everyone, especially those who have been marginalized.  “I think it is our job as songwriters to speak not, only from our own perspective, but from the perspective of others,” Moksha said.

The music of HuDost does just that.

(To learn more about this unique duo, follow this link: www.hudost.com )