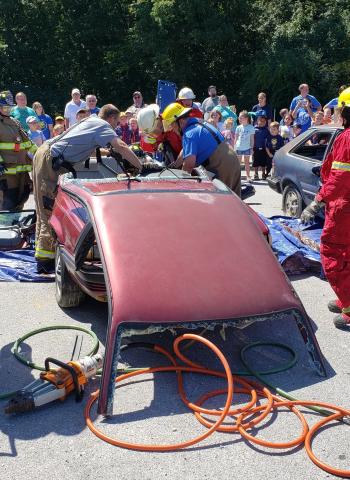 An emergency rescue demonstration was held last weekend - Saturday, September 7 -  at the Eva J. Hawes building in Morgantown.  The Morgantown Fire Department and Rescue Squad made this mock accident believable as there was even a chopper flown in by Petrol Helicopter International from Greenville.

There were two cars involved and live victims to be saved, the jaws-of-life and powerful metal cutting saws were used to extract the survivors. The entire roof was cut off one vehicle.

Local Cub Scouts Pack 208 Leader Jessica Deweese arranged all the action. She also and invited Pack 33 from Beaver Dam, Pack 505 from Rockfield and Pack 597 from Edmonson to participate in earning patches and witnessing something that few people see.

Steven Sublett, Chief of the Morgantown Fire Department, talked to the Scouts about safety and first aid.

Brandon Keown, Chief of the Rescue Squad, was very active in the rescue, along with his team.

Captain Richard Larson, pilot of the PHI Helicopter, and Kim Vender, registered flight nurse, gave everyone a thrill when they did a fly-over around the field before landing.

Angie McConnell from Air Medcare, a competitor of PHI, was also present.  She stated that "in an emergency, there are only rescuers working together to save people."