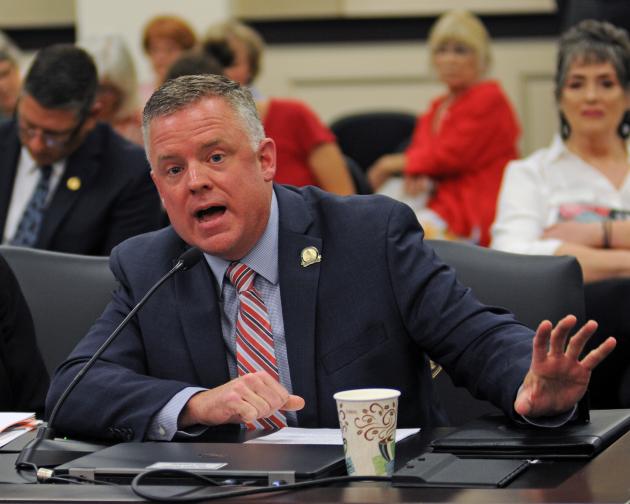 FRANKFORT—Rep. Matt Lockett, R-Nicholasville, said he believes his bill, Bill Request 69 “will be one of the most vital pieces of legislation” that will be considered when the General Assembly convenes for its 2022 session.

According to Lockett, who is the bill’s primary sponsor, the goal of BR 69 is to ban the teaching and promoting of critical race theory in Kentucky’s public schools. The pre-filed bill was the main topic of discussion during today’s Interim Joint Committee on Education meeting.

Lockett along with one of the bill’s co-sponsors Rep. Jennifer Decker, R-Waddy, said they have both heard from parents and educators across the Commonwealth who say CRT is being taught in schools and that they are against it being part of the school curriculum.

“The Kentucky Department of Education is not aware of any districts or teachers specifically teaching critical race theory and neither CRT nor terms associated with it appear in our state standards,” Glass said.

Although he is not an expert on critical race theory, Glass did offer a definition of CRT and suggested the committee invite an expert to testify.

“Critical race theory is a decades old legal and academic theory which seeks to explain why racism continues to exist,” Glass said, adding that CRT is typically taught and discussed in graduate-level courses and is not a developmentally appropriate concept for elementary and middle school-aged students.

In regard to BR 69, Glass said the bill hurts freedom of speech and that these types of laws hurt education and hinders the state’s ability to recruit and retain teachers.

During discussion, Rep. Tina Bojanowski, D-Louisville, criticized the importance of the bill compared to other issues such as the suicide ideation rate among children and the high child abuse rates in Kentucky. She, along with Rep. Lisa Wilner, D-Louisville, also criticized the bill’s language.

“When I read Bill Request 69, I found it vague,” Wilner said. “…The goal seems to be to want to ban discomfort, but you know, unfortunately, that’s not really something we can legislate.”

Lockett responded by explaining the goal of the bill isn’t to just eliminate the term critical race theory, but to make sure students are not taught they are less than somebody else due to the color of their skin.

As the nearly 2 and a half hour meeting came to a close, lawmakers hinted this will not be the last time BR 69 or any other critical race theory related legislation will be discussed during the interim.

Any official action lawmakers choose to take on BR 69 cannot begin until the legislative session begins in January 2022.