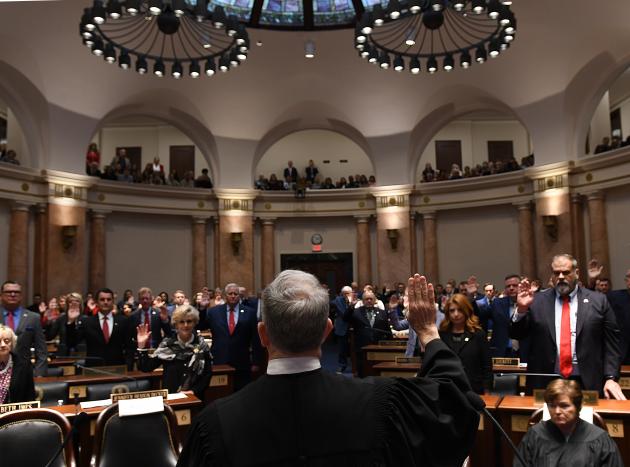 FRANKFORT — The Kentucky General Assembly kicked off the 2023 Regular Session this week by welcoming dozens of new lawmakers into the ranks and moderating the tempo somewhat in a nod to the traditional “short” sessions of the past.

But even with the new members and measured pace, legislation on two key issues cleared important hurdles over the first four days.

On Thursday, the House advanced House Bill 1, which builds on a major overhaul to Kentucky’s tax structure that began last year. The bill would codify a drop in the state income tax rate from 5% to 4.5% for 2023 and further reduce the rate to 4% beginning next year.

Supporters say the overhaul will provide financial relief to Kentuckians by gradually eliminating state taxes on personal income while simultaneously expanding the state’s overall tax base. Critics, however, say it will undermine state revenues without offering much benefit to middle- and low-income families.

HB 1 now heads to the Senate for consideration.

On Friday, the Senate passed Senate Concurrent Resolution 31 to create an emergency work group that will examine the state’s troubled juvenile justice system.

The panel will review safety, staffing and management of the system to determine if reforms are needed and report their findings back the General Assembly.

Friday’s proceedings concluded Part I of the 2023 session, one in which new members make up nearly a quarter of the legislature. When the chambers gaveled in on Tuesday, a total of 31 new lawmakers received the oath of office – 25 in the House and six in the Senate.

Along with the fresh faces came changes to committees and even some to leadership, including the minority floor leaders in both chambers. Both chambers also decided to divide up their respective committees on health, welfare and family services into separate committees this year that could better focus on key issues.

The Senate also took time on Friday to say goodbye to Sen. Ralph Alvarado, R-Winchester, who has accepted an appointment as commissioner for the Tennessee Department of Health.

Amid all the changes, one of the most noticeable differences this week was an effort to return to the original intent of the short, 30-day legislative sessions.

Ever since an amendment to the state constitution in 2000, the General Assembly has met in short sessions during odd-numbered years. The proceedings were intended to bridge the gap between longer, 60-day sessions in even-numbered years.

Early on, lawmakers tended to avoid major legislation during short sessions, opting instead to focus on smaller issues and procedural matters. But short sessions have grown more complex over time.

House Speaker David W. Osborne, R-Prospect, told reporters on Tuesday that, after several years of aggressive agendas, he expects lawmakers will pump the breaks some this year.

“I think this is going to be a much more traditional short session,” he said.

Citizens can also share their views on issues with lawmakers by calling the General Assembly’s toll-free message line at 1-800-372-7181.