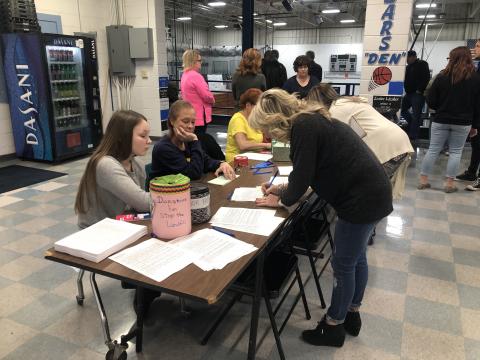 The Butler County Opry, held on Saturday night at Butler County Middle School, was a huge success.  The event was in support of efforts to prevent a landfill from locating in Butler County.

The state has approved Owls Head's notice of intent to build a landfill in Butler County. That is the first step of several that they must complete to gain final approval. Once Owls Head files their next application, a 30-day public comment period will open, which is why the Butler County Opry /letter signing was organized. Letters were available to sign, and envelopes and postage was provided. Embry Impressions provided the letter and envelopes.

CLICK here for a copy of the letter: Landfill Letter.pdf

Butler Countians made donations of $525 on Saturday night. Butler County Stop The Landfill is also preparing a county-wide mailer/letter so that everyone in Butler County will have the opportunity to let Frankfort know their concerns.

WLBQ101.5 DJ Josh Hampton served as emcee for the night.

Up In Smoke provided food for the evening.