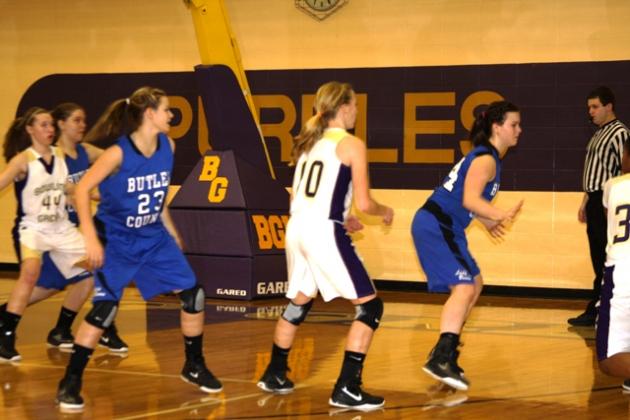 Before the game BGHS Head Coach LaVonda Johnson had good things to say about the girls from Butler County. “I told my girls that they think they’re tough because we score a lot and have won some games. I pointed at your girls and told them that they’re really the tough ones. You’re young, you have probably your best player hurt, but you keep on playing and playing hard. That’s tough,” said Johnson.

Once the game started the time for being nice was over. The Lady Purples press constantly, as the BCHS girls found out first hand. BCHS stayed with the Lady Purples for the game’s first four minutes, prompting Coach Johnson to call a timeout to settle her team after BCHS found a way to break the pressure. The score was 9-5 BGHS when Johnson called the timeout.

The BGHS girls came out at full speed to open the second half. Behind the play of Brittany Vaughn who led all scorers with 25 the Lady Purples rolled after the break. In the end the BGHS team was just too much and cruised to a one-sided 71-13 final score.

After the game Coach Clark said that she hadn’t been more proud of her girls than she was on Tuesday night. Clark pointed out that despite the one-sided score that all of the Lady Bears played hard until the final buzzer.

The Lady Bears will be in action Thursday night in their final home game against Apollo, and on Saturday at Allen-County Scottsville High School.