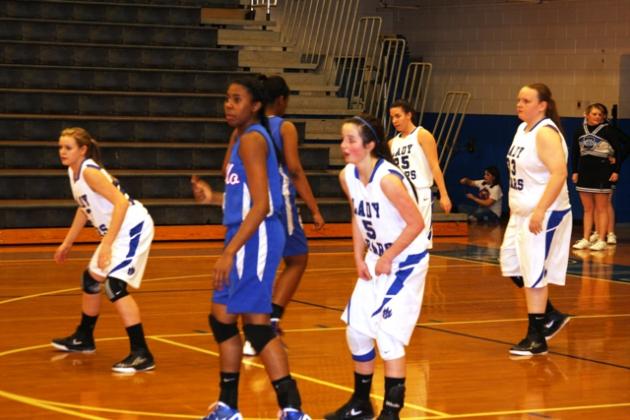 The Lady Bears hung tough in the early going. Katie Graham had 6 points in the opening period for BCHS. Russellville gets their scoring from any number of girls, and in the first period it was Amber Sydnor who paced the Lady Panthers with 5 points as RHS opened up a 12-8 lead after a period of play. Imani Hampton established herself inside and outside for RHS in the second period. Hampton had two close baskets and two 3-pointers for ten points in the period as RHS began to wear down the Lady Bears with their speed and deep bench. No BCHS girl had more than a basket in the second period and RHS went to the break leading 26-15.

Graham continued her strong play in the third period, dropping six points for the Bears, but RHS found their offensive flow in the period. Khalia Hampton had 8 points in the period and Sydnor added four as the Lady Panthers continued to slowly extend the lead on BCHS at the end of the period they led 40-23. That’s when BCHS started their comeback, and thwarted any plans that RHS Coach Dedra Adler may have had to rest her starters. Madeline Drake had 13 points in the final period to lead the BCHS comeback. The RHS offense stalled in the fourth, but there just wasn’t enough time left in the game for BCHS to complete their comeback. In end the big RHS lead was too much, and the Lady Bear fell by a final of 53-42.

Madeline Drake led all scorers in the game with 18 points, including 13 in the final quarter. Katie Graham added 14 points and 15 rebounds for the Lady Bears who dropped to 4-19 on the season. The Lady Bears will be in action on Tuesday night in Bowling Green, taking on the 19-3 Lady Purples of Bowling Green High School. The game will be broadcast live on AM 1570 WLBQ beginning at 7:20.

The Butler County Lady Bears were busy over the weekend. On Thursday night the Lady Bears had their final home game of the season when they played host to the E-gals of Owensboro Apollo High School.

The E-gals came out in a full-court press from the opening tip, but the Lady Bears handled the pressure well for their first few possessions. However the Lady Bears were unable to convert once the press was broken. At the end of the first period the Lady Bears were down 16-8, but hopes were high because of their ability to break the press. When the second period opened the E-gals continued to press, but the baskets began to fall for the BCHS girls. The two teams traded baskets for most of the period and headed to the locker room with the score 31-20. Katie Graham had an outstanding half for the Lady Bears, knocking down 14 points and adding 6 rebounds. Haley Root led OAHS with 11 points.

On a frigidly cold Saturday night the Lady Bears took the bus to Scottsville for their second meeting of the season with the Lady Patriots of Allen-County Scottsville High School. The Lady Bears fell to the ACS on January 31st in Morgantown by a score of 75-40. Madeline Drake had 21 in the first meeting with ACS led by Sandy Young and Morgan Rich with 16 each.

On Saturday night the Lady Patriots pressed the Lady Bears and seemed determined to put the game away early. Sandy Young again was tough on the Lady Bears, with 9 points in the first half. She was joined by three other players with 7 points each as the Lady Bears fell behind early by a 36-13 margin at halftime.

Things got no better for the Lady Bears after halftime. On the coldest night of the year so far the Lady Bears had their coldest shooting night of the season, shooting 7 of 47 for 14% in the game. Madeline Drake was only Lady Bear in the game with double figures, scoring 11 points. The Lady Patriots got 20 points from freshman Morgan Rich and coasted home to an easy 63-26 win.