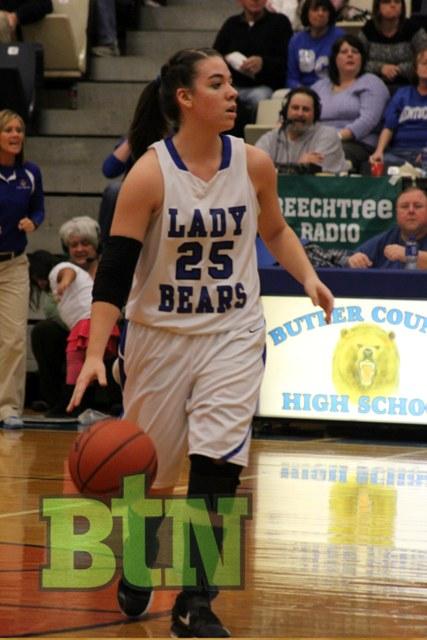 Deanna Raley and McKinzie Tichenor staked OCHS to a ten point lead after a period of play. The duo combined for 15 points in an opening period that was noticeably rough to the small BCHS crowd gathered at the gym. Keeping the Lady Bears in the game early was 7th grader Chloe Flener who turned in her best game as a varsity player. Flener started on Thursday night and scored the Lady Bears first five points. Flener would finish the game with 9 points, three rebounds, and a blocked shot in the game. Katie Graham added a basket in the opening quarter and 8th grader Kasosha Turner added a free throw as the Lady Eagles led 18-8 after a period of play.

With 2:31 left in the first period guard Shawna West of BCHS drove along the right baseline and was taken down hard on her layup attempt. The ball ended up lodged between the rim and the backboard for a jump ball, and play was stopped as West held her right knee in obvious pain. After several anxious minutes on the floor the freshman was carried to the bench by the BCHS coaching staff and was later transported to a local hospital by her family. The preliminary diagnosis as of Friday morning is a sprained knee for West. According to the family she will be day-to-day and could be out for up to two weeks with the injury.

Things got no better for BCHS in the second period as Coach Hill turned up the pressure on the young Lady Bears and used his deep bench to play nine different girls in the first half. Katie Graham stepped up her scoring in the second period, dropping 7 points on the Lady Eagles to lead the Lady Bears into the locker room with 9 points. Unfortunately for the Lady Bears the tandem of Tichenor and Raley continued to score almost at will. Both girls used an inside/outside attack to score equally from in the paint and behind the arch for the Eagles as Ohio County took a 41-19 lead into halftime.

Coach Christy Clark of BCHS rotated a steady stream of 7th and 8th graders into the game to keep her team’s legs fresh, but the OCHS experience started to dominate the game in the final period. Then, with 4:30 to go in the game guard Madeline Drake left the game. Drake tangled with Raley and went down hard, striking her head on the floor. Drake was whistled for a blocking foul to foul out of the game. Drake was down on the floor for several minutes before walking off under her own power. After the game Drake was taken to a local hospital for tests by her family. According to Coach Christy Clark, Drake has a mild concussion and will be out for Saturday’s game versus McLean County. Drake finished the game with 5 points and three rebounds.

Moments after the game restarted sophomore Katie Graham had to leave the game after turning her left ankle. That injury forced Coach Clark to field a team consisting of four seventh-graders; Allie Easley, Chloe Flener, Addison Hall, Cheyenne White, and 8th grader Kasosha Turner. The youngest of the Lady Bears didn’t back down from the Lady Eagles even though they lost the quarter 17-6. Middle School Coach Angie Easley praised her girls after the game. “He left his starters in and pressed us, but I’m proud of our girls. They played hard and didn’t hang their heads at all,” said Easley.

The Lady Eagles won the game by a final score of 71-34. Raley led all scorers in the game with 25 points. Tichenor added 21 for the Lady Eagles. Katie Graham had 12 to lead the Lady Bears’ scoring. The short-staffed Lady Bears will take on McLean County on Saturday night without two starters, Drake and West. The game will be a JV/Varsity doubleheader and will start at the normal time of 6 p.m. A misprint on the schedule lists the starting time at 4. Varsity will tip at approximately 7:30. The game will be covered live on AM 1570 WLBQ beginning at approximately 7:20 p.m. The voice of BCHS men’s home games and Bears’ football David Clark will handle play-by-play with Diane Dyer on color. The game can also be streamed live on Beechtreenews.com by clicking the radio icon at the top of any BTN page.