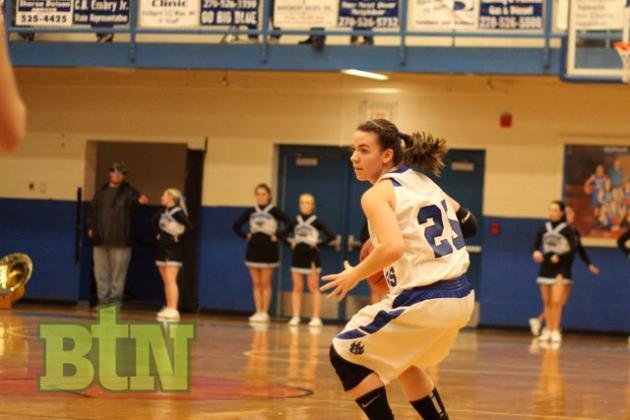 For the game’s opening minutes the Lady Bears hung tough with the ACS ladies. With 5:05 to go in the period the game was tied 6-6. That’s when Coach Brad Bonds turned up his defensive pressure, and the Lady Patriots went on a 21-0 run to finish the first quarter and start the second quarter. When the Lady Bears finally hit a free throw to stop the run the damage was done and the score was 27-7 with just over three minutes played in the second period. The Lady Patriots were matched by the Lady Bears to close out the half, but ACS was up 39-19 at halftime.

The second half opened with Coach Bond’s leaving a couple of starters on the bench as he mixed in his youngsters with his experienced players. Coach Christy Clark used her bench as well as the one-sided affair turned into a teaching situation for both coaches. The bright spot for BCHS was once again the strong play of junior guard Madeline Drake. Drake left the game only once and handled point guard duties in the absence of Shawna West who missed her third straight game with a knee injury. Drake finished with 21 points for BCHS to lead the Lady Bears scoring.

ACS outscored the Lady Bears 18-8 in the third quarter and 18-13 in the fourth period behind the play of their prolific scoring duo of senior Bre Boards and freshman Morgan Rich. Rich had 16 and Boards added 14 for the Lady Patriots as they took the win by a final score of 75-40.

The Lady Bears and Bears will be in action on Friday night in Morgantown when they host Edmonson County High School for the final district match-up of the season. Butler County swept ECHS out of the All "A" Classic in January, but split the first meeting of the year with the boys beating the Wildcats and the Lady Bears falling on the road in Brownsville. The Lady Bears also have a game on Saturday in Morgantown when they host Breckinridge County High School.

Coverage of Friday’s game will begin at 5:45 on WLBQ AM 1570 and on www.beechtreenews.com by clicking on the radio icon. Friday night’s game is also chili supper and meet the team night for the BCHS baseball team. Fans can support the baseball program by buying a $5 chili meal which includes a bowl of chili, hotdog, desert and drink. It will also be a chance for fans to meet new BCHS baseball coach Kevin Winn. The supper will be in the BCHS commons area and begins at 5 p.m.