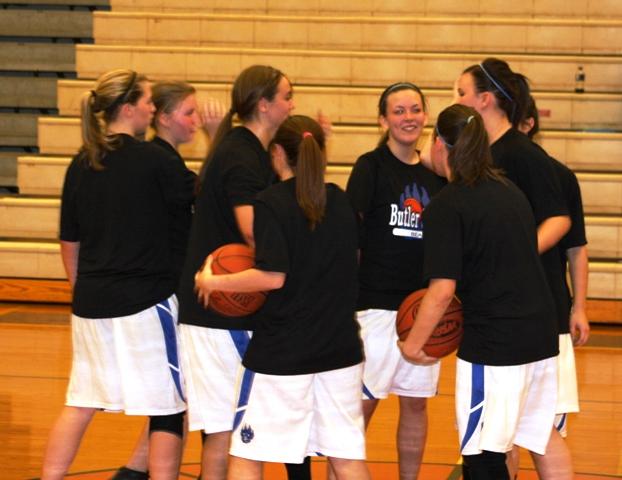 The 2011-12 edition of the Butler County Lady Bears debuted on Monday in Morgantown before a sparse crowd. The opening night opponent for the Bears was the Lady Hornets from Hancock County. Hancock came in to the game looking to avenge a season-opening home loss to the Lady Bears a year ago. The Lady Hornets have only one senior and return all five starters from a team that went 13-14 a year ago.

The Lady Hornets struck first and opened a 4-0 advantage before Lynsie Clark scored the first of her 17 points with a free throw to make the score 4-1 in favor of the visitors. Hancock used strong rebounding and inside play from senior Samantha Sanchez and Beth Rates to build a 12-8 advantage at the end of the first period.

The Lady Bears started nervous according to comments made by Lynsie Clark after the game. However they began to settle down in the second period. Clark used her quickness to drive to the bucket and score twice, and freshman Shawna West hit an open three from deep on the right wing to bring BCHS within a basket at 18-16. Then moments later Sophomore Katie Graham rebounded a Clark miss to tie the game at 18 all. Hancock was able to answer with the first of Mollie Bozarth’s four three-point baskets to retake the lead. The Lady Bears outscored Hancock 11-4 during a key four-minute stretch of the second quarter and went into the locker room trailing only 25-20.

All hopes of a Lady Bear comeback were squelched early in the second half. Hancock County’s Mollie Bozarth and Audrey Hawkins had the hot early in the third period, striking three times from three-point range, and Beth Rates converted several missed threes into easy baskets underneath despite the best efforts of Katie Graham and rookie Kashasha Turner. Lynsie Clark continued to carry the scoring load for the Lady Bears in the 3rd period, but Hancock’s advantage on the boards led to a 35-27 lead at the end of the third period.

The Lady Bears fought hard in the fourth period and tried to mount two comebacks, but both times Hancock was able to quiet Butler with three pointers. In the end the inside play of Rates combined with 7 made threes was too much for the Lady Bears and they dropped the opener 54-40.

After the game Lynsie Clark told radio listeners that she feels good about the team despite the loss. “We haven’t been able to play a lot together because we didn’t have enough girls early in the season. We’ll get better.”

The next test for the young Lady Bears will be Friday night when they travel to Grayson County for a Boy/Girl Doubleheader with the Cougars and Lady Cougars from GCHS. In recent years Grayson County has established themselves as the team to beat in the 3rd Region’s 12th District, and the arch-rival of the Lady Bears. The Lady Cougars swept all three games with the Lady Bears in 200-11 including a contentious meeting between the teams during a January doubleheader in Caneyville.

The Butler County Bears open their season at home Tuesday night with a JV/Varsity showdown with a strong team from Owensboro Apollo High School. The Bears home opener will be broadcast live on Beechtree Radio 1570-AM WLBQ beginning at 7:15 with the pregame show. Longtime Bears radio voice David Clark will return to the mic tonight after a two-year hiatus from basketball and will bring the call for the bulk of Bears games in 2011-12.