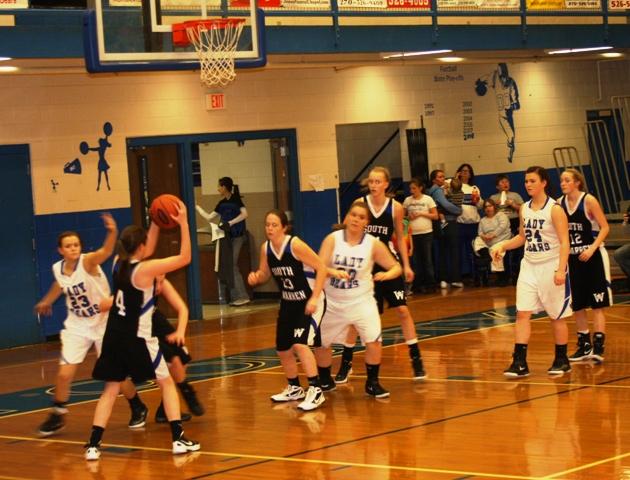 It was Bearfest night in Morgantown on Friday night as the Bears and Lady Bears of Butler County High School hosted South Warren High School.

Katie Graham and Chloe Flener led BCHS in the second quarter with 4 points each, but the Lady Spartans spread the scoring around and hit crucial three-pointers against the BCHS zone to protect their lead. At halftime South Warren held a 25-20 lead.

The second half was a back and forth battle between the two schools. Katie Graham led all scorers in the second half with 15 points and 7 rebounds and got the Lady Bears even with the Spartans late in the game at 35-35. However the Lady Bears could not find a way to keep the Lady Spartans off the boards and couldn't convert important scoring chances. In the end the Lady Spartans spoiled the Bearfest opener by winning 44-39.

Graham led all scorers with 19 in the game and added 10 rebounds. Graham was named Thursday night to the 3rd Region All ‘A’ All Tournament Team along with Madeline Drake. Shawna West was named to the Tourney’s All Academic Team.

During the break between the games C.W. Decker and Madison Embry were crowned Bearfest King and Queen for 2012.  Collin Tomes and Raven Durbin were named honorary King and Queen. After the coronation it was time for the Bears and Spartans to tip off in the night cap.

The BCHS fans were relieved to see Trevor Jenkins back on the court for the Bears. Jenkins left Tuesday’s game at McLean County in the first half after taking a hard fall, but was back Friday with no ill effects from the tumble.

The boys from South Warren seemed determined to make it a sweep of BCHS’s homecoming as the second game opened. Led by Josh Bartley and Travis Hardcastle the Spartans owned a 17-10 lead after one period. BCHS was led in the first period in scoring by Jackson Washer with four points. The Bears struggled in the first to deny scoring inside, and contain the SWHS shooters.

BCHS won the second quarter 20-19 behind strong play from a trio of Bears; Washer, Zeke Woodcock, and Elijah Flener. Flener had seven with Washer adding six and 5 from Woodcock as the Bears chipped into the SWHS lead and went to the locker room down 36-30.

The Bears shot themselves back into the game in the third quarter. Flener had 8 points and Jackson Washer connected on two three-pointers as the Bears outscored the Spartans 18-9 and took the lead 48-45 with a period to play.

The fourth period was a back-and-forth affair highlighted by SWHS runs to try and get back into the game. Butler County had the lead extended to as much as six at 56-50, but turnovers let SWHS back into the game. Woodcock led the Bears with four in the quarter, and Trevor Jenkins seemed to put the game away with less than a minute to play with a long three off the left wing, but SWHS kept fighting back. The Bears owned a 62-60 lead with 2.4 seconds to play when Travis Hardcastled rebounded a missed three-pointer and tied the game with a layup to send the game to overtime.

Dylan Goodall scored his only points of the game in the opening seconds of overtime to give BCHS an early 64-62 lead. Goodall was hampered offensively in the game after tearing his thumbnail early in the game, but hit his driving shot in the paint to spark the Bears. Moments later the spark for the Bears came from Bears’ Assistant Coach Chad Flener and Assistant Scorekeeper/Bearfest King C.W. Decker.

SWHS called timeout after an Elijah Flener basket extended the lead to 68-64. Coming out of the timeout Brad Logsdon and Travis Hardcastle both checked into the game for SWHS, but only one player checked out, leaving SWHS with six on the floor as the clock started. Decker and Flener screamed at the referees from the bench to alert them to the mistake, leading to a technical foul call against the Spartans. Flener hit both free throws, then made a driving layup to make it a four-point trip for the Bears, and the game was all but over at that point. Flener scored ten of BCHS’s 14 points in the overtime as BCHS pulled away in the extra period to win 76-69.

Elijah Flener had a career night for the Bears in the win. Flener poured in 29 points and along with six rebounds and five assists for the Bears. Jackson Washer found his scoring after a pair of off games. Washer had 18 points with 7 rebounds and Zeke Woodcock continued his strong play with 15 points and six rebounds. Butler County was outstanding from the free throw line on Friday night, shooting 29 of 30 from the stripe for 96.7% and didn’t miss a free throw in the second half or overtime.