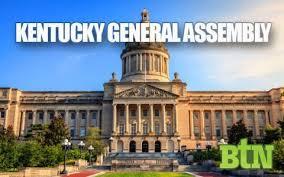 FRANKFORT— The Kentucky General Assembly spent its second to final day of the 2021 legislative session overriding gubernatorial vetoes related to the state budget.

The roughly $12 billion executive branch budget outlined in House Bill 192 is described as a near continuation budget from the previous fiscal year with necessary modifications.

Today, lawmakers voted to override 18 out of the 20 vetoes the governor issued to portions of House Bill 192. The vote to override the vetoes was 71-24 in the House of Representatives and 31-7 in the Senate.

The portions of the budget that lawmakers allowed vetoes to stand included three line items. In his veto message, Gov. Andy Beshear wrote those line items would conflict with other bills signed into law this year, Senate Bill 101 and House Bill 194.

In explaining her vote, Rep. Felicia Rabourn, R-Turners Station, spoke out strongly against the governor’s vetoes and thanked her colleagues in voting to override them.

“It’s disgraceful,” Rabourn said. “And we are not intimidated.”

Those in favor of sustaining all of the governor’s vetoes expressed concerns about the provision in the bill that states the billions in COVID-19 federal relief money Kentucky is expecting to receive from the American Rescue Plan Act cannot be expended without the “express consent” of the General Assembly.

Rep. Buddy Wheatley, D-Covington, spoke against this part of the bill. In quoting Beshear’s veto message on the House Floor, he said: “’This provision also slows and hinders the provision of assistance to many Kentuckians that are unemployed and underemployed, to affect Kentucky businesses and nonprofit organizations.’”

Overall, the executive branch budget will raise the balance of the state’s reserve “rainy day” fund to about $958 million. It appropriates $4.1 million in federal funds for pandemic related-relief programs, $500,000 to address security concerns for the Attorney General and full funding of the actuarial required contributions for the Kentucky Teachers’ Retirement System and Kentucky Employees Retirement System.

The General Assembly also voted to override three out of the four vetoes on the judiciary branch budget as detailed in House Bill 195. The motion was approved in the House by a 69-23 vote and in the Senate by a 27-11 vote.